Call of Duty Wiki
Register
Don't have an account?
Sign In
Advertisement
in: Call of Duty: Black Ops 4 Handguns

For the predecessor, see KAP-40.
For a similarly named submachine gun, see KSP 45.

Tier 25 of the Barbarians Event

The KAP 45 is a fully-automatic pistol featured in Call of Duty: Black Ops 4. It was added as part of the Barbarians special event in the Black Market on January 22nd, 2019 on the PlayStation 4, and January 29th on the Xbox One and PC. It can be unlocked by reaching Tier 25 during the event.

The KAP 45 can be used once the player reaches Tier 25 during the Barbarians event. It also appears as the first weapon used in Blackjack's Gun Game, where it comes equipped with a Reflex Sight.

As the successor of the KAP-40, the KAP 45 shares many similarities with its predecessor. The KAP 45 can be greatly utilized in close quarters combat due to its fast fire rate, and can be treated as a mini submachine gun. However, using the KAP 45 at longer ranges can be quite difficult, due to the noticeable recoil and small magazine of only 20 shots. To compensate for the weapon's small magazine and fire rate, the Hybrid Mags can be used to increase the KAP 45's magazine size to 30 shots. The Grip can also be utilized to help reduce the recoil given off by the weapon. The Fast Mags can also help speed up the weapon's reload time.

Both Rapid Fire and Rapid Fire II turns the KAP 45 into a devastating weapon at close range due to its severely increased fire rate, rivalling the Spitfire. However, the player will be prone to burning through the weapon's already low reserve ammo count, so perks such as Scavenger and Gung-Ho can benefit the player in procuring more ammo and having the ability to reload while sprinting.

The KAP 45 was added to the Mystery Box on all maps, and can be customized in the Armory once the player acquires the KAP 45 from the Barbarians event's contraband.

When upgraded via the Pack-a-Punch Machine, it becomes the IM-PAK-D, gaining increased damage, a magazine size of 40 shots, and a reserve count of 320 additional shots.

The KAP 45 can be found in Blackout.

The KAP 45 in first person. 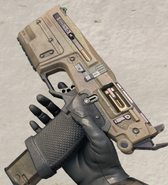 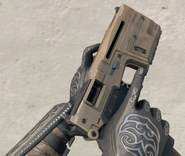 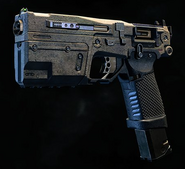