The KBAR-32 (referred to as AR57 in the game files) is a Kendall Ballistics bullpup assault rifle in Call of Duty: Infinite Warfare.

When all side missions are completed, the KBAR-32 unlocks High-Impact Rounds, which ensure no fall-off damage when firing at long ranges.

The Epic Invective variant has a higher headshot multiplier but a lower damage multiplier to the limbs. It essentially gives the player a free Hollow Point, but at the cost of lower limb damage. However, it is not possible to add Hollow Point on to double the effect.

The March 10th, 2017 patch updated the KBAR-32 to have a reduced 4-shot kill range, slightly hindering the mid range capabilities of the weapon.[1]

The KBAR-32 appears in Zombies. It is unlocked after level 38. In Zombies in Spaceland, Rave in the Redwoods, Attack of the Radioactive Thing and The Beast From Beyond it is available from the Magic Wheel. In Shaolin Shuffle , it is located in the Inferno Club for 1,500 points.

The KBAR-32 in first person 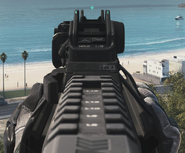 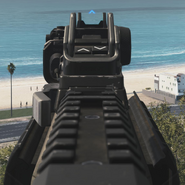 Aiming with the Invective variant 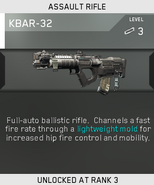 The KBAR-32 being unlocked in Multiplayer