When all side missions are completed, the Longbow unlocks the Stasis upgrade, which increases the magazine size and heavily reduces sway when scoped-in, negating the necessity of a Ballistics CPU.

In the mission Operation Dark Quarry, several C6 robots can be found wielding semi-automatic versions of the weapon, which can be used by controlling them with the Hacking Device.

The KBS Longbow is available immediately to the player at Level 1, and is the most powerful Sniper Rifle in the game, being a 1 shot roughly always, if aiming above the thighs. This is not affected with the addition of Suppressor, making it a highly powerful attachment on the Longbow. The low rate of fire, however makes follow-up shots against enemies difficult, and coupled with the moderately slow reload, the KBS Longbow fares very badly in close-quarters combat, but Dexterity significantly reduces the reload time. It has low idle sway, meaning that it is very accurate. This is further helped by the glowing scope reticle heavily contrasting against enemies.

The KBS Longbow is a Sniper Rifle available from the Magic Wheel for $950 or from a wall-buy on Rave in the Redwoods for $1250. At level 15, it becomes available for modification via Weapon Kits. It is one of the most powerful weapons available in Zombies, as it is effective until between round 10 and 15. Its primary disadvantage is being unable to remain scoped in once fired, similar to the Multiplayer version, but this is less of an issue in the Zombies mode, since re-acquiring a target is very easy. Another major issue is the low rate of fire typical of a heavy bolt-action Sniper Rifle, meaning that it can be unreliable in close-quarters. This is partially negated with the use of the Bang Bangs perk. A minor issue is the slow reload speed, also negated by the Quickies perk. Optical attachments are greatly welcomed on the KBS Longbow, allowing the weapon to be more adequate at short range, but apart from that, attachments don't improve the performance of the Longbow very much.

When Pack-a-Punched, it becomes the Wasp's Stinger. It becomes significantly more powerful and has a slightly larger magazine, more reserve ammo and when fired from the hip it shoots four rounds in a cone-shaped pattern. It can kill multiple zombies from a single shot until the mid to late 20s. It also becomes more accurate, being even more suited to taking out zombies from a distance, quite useful on the large Zombies in Spaceland map. When used with the previously mentioned perks and some survivability and mobility perks, the weapon becomes highly effective, useful until the early 30s. When double Pack-a-Punched, it becomes the Scorpion's Stinger and further bolsters previous traits of the weapon.

The KBS Longbow in first person 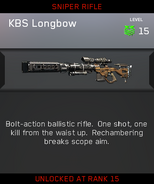 The KBS Longbow being unlocked in Zombies