For another variant of the KN Platform, see KN-57.

The KN-44 is a widely manufactured military grade production of the KN weapon platform. The KN-44 is fast and easy to produce, making it ubiquitous amongst armies worldwide with a need to quickly arm large numbers of riflemen.

The KN weapon design affords production plants their choice of quality of parts, meaning that even though all KN-44 parts are interchangeable, there is no guarantee any two KN-44 rifles around the world will perform the same. Since there is no standard, the designation "KN-44" is typically given to any rifle of military issue fitting the KN pattern.' The KN-44 is highly customizable, and its standard pattern offers a good balance of stopping power, performance at range, and rate of fire. A properly built KN-44 with the right modifications can easily meet the performance demands of the modern infantryman.

The KN-44 is unlocked right from the start of Multiplayer. It is one of the default guns, meaning it can be used from level 1.

The KN-44 deals moderate damage. At any range short of 17.5 meters it will take three hits to kill. Past this range the KN-44 will be a four hit kill (in Hardcore, it will be a two hit kill past 50 meters). By default, the KN-44's headshot multiplier is only useful in Hardcore game modes, where the KN-44 can get a one headshot kill at any range. The KN-44 has medium penetration, as with most assault rifles.

The KN-44 fires fully automatic at 625 RPM and is only bested by the HVK-30 and the FFAR. It may be above average as an assault rifle in this regard, but all SMGs can match or best this fire rate. The iron sights are clean, but the KN-44 has omni-directional recoil, kicking upwards and to the sides equally. As well, the KN-44 by default has the highest amount of idle sway in the assault rifle category, and one of the highest amounts of idle sway in the game. Only the Vesper and SVG-100 have more idle sway by default.

The KN-44's handling characteristics are average for an Assault Rifle. It permits the user to move at 95% the base speed, 90% when firing the KN-44 while not aiming, and 38% when aiming the KN-44. The KN-44 has a moderately sized hip-fire spread and aims down the sights in 380 milliseconds. The KN-44 reloads fairly quickly, taking 2.03 seconds to reload the KN-44, 2.8 seconds if the KN-44 is empty, or 1.4 seconds to Reload Cancel the weapon.

The KN-44 has a 30 round magazine for an Assault Rifle, and spawning in with four magazines total, or 120 rounds by default.

Both the Quickdraw Grip and the Stock both help improve on the KN-44's handling characteristics by reducing the aim down sights time to 266 milliseconds and increasing the strafe speed to 68% while aiming (but reducing to 57% while firing and aiming). These attachments give great tangible benefits to the KN-44, and the player can't go wrong with choosing these attachments.

The Laser Sight will reduce the KN-44's hip-fire radius by a considerable amount, allowing the KN-44 to be very accurate from the hip.

FMJ allows the KN-44 to pierce through cover with greater efficiency. This makes the KN-44 quite powerful at shooting through light cover and moderately thick cover.

Fast Mag and Extended Mags both help the KN-44 in regards to reloading. Fast Mag will decrease the KN-44's reload times, with a reload cancel time of 0.77 seconds at all times. This makes the KN-44 reload considerably faster. Bear in mind, however, that the KN-44 will have one of the slowest first reloads of all Assault Rifles with Fast Mag. Extended Mags increases the KN-44's magazine capacity to 42 rounds and the KN-44's starting ammo loadout will increase to 168 rounds.

High Caliber is a powerful attachment on the KN-44, increasing the headshot multiplier to 1.6x over 1.1x. This makes headshots reduce the amount of shots to kill by one in core game modes. However, this effect is unnecessary in Hardcore game modes, with 1.1x being sufficient to guarantee a one headshot kill at any range.

Rapid Fire is fairly poor on the KN-44, only increasing the fire rate to 666 RPM, a poor upgrade over the KN-44's 625 RPM. Due to the small tangible benefit, it is within usual interest to avoid the attachment.

The KN-44 can be compared to the Kuda, featuring the same amount of ammunition as the SMG, but trading the faster strafing speed and fire rate for a larger headshot multiplier. The KN-44's reliability makes it an efficient weapon during early rounds, allowing players to purchase more ammunition whenever they want. However, the KN-44's low damage, average magazine size and low reserve ammunition count can be a letdown compared to other weapons the player can get.

When upgraded via the Pack-a-Punch Machine, it becomes the Anointed Avenger, with an increased magazine capacity, more reserve ammo, and increased damage.

As with most weapons, it is recommended to run Double Tap Root Beer to maximize damage.

The KN-44 appears in a blueprint made by Dr. Monty, which is seen both in The Giant and a loading screen from the zombies comics. A copy of the KN-44 also appears during the Der Eisendrache Easter Egg My Brother's Keeper, where a KN-44 flies from Dempsey's Rocket into a bush along with Dempsey's cryo-chamber.

The KN-44 in first person 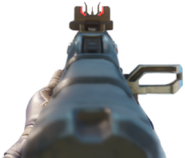 Render of the KN-44's model

Anointed Avenger in The Giant

The KN-44 in the Paintshop; note that it was named the "ARAK" in the alpha build

The KN-44 is a cut weapon from Call of Duty: Black Ops 4. It can be seen in pre-alpha footage, and remnants of the weapon still remains within the game files.

Some unusable golden KN-44s can be seen on the wall in the multiplayer map Hacienda (and Hacienda Twilight) The weapon was also previously seen wielded by "Tank" Dempsey in the poster artwork of Blood of the Dead. The KN-44 is also seen in the intro cutscene in Tag Der Toten, held by Samuel J. Stuhlinger, but the KN-44 does not actually appear in the level.

KN-44 being held by the Player.

The KN-44 returns in Call of Duty: Mobile. it was added during the Season 4 Disavowed update.

The KN-44 has low damage drop off at range and low recoil, giving it good combative edge in mid to long range encounters. At close range, however, the gun faces many other guns of its class that are better at scoring quick kills, putting the KN-44 at a great disadvantage. The recoil is mostly horizontal that only kicks in after firing the first 10 shots. Compared to the LK24, the KN-44 has the same fire rate and damage, but due to the lower damage drop off per shot, hitting one headshot at mid range will give the KN-44 a big advantage, but this is hard to achieve due to the rather bouncy recoil.

The KN-44 was added into Battle Royale in Season 9. It has low recoil and good rate of fire, however its damage is very low compared to other Assault Rifles. The KN-44 was available for ground loot as Uncommon and Epic blueprints, both of which were removed in Season 13. Now it is currently only available as customized blueprints obtainable in Airdrops.

First-person view of the KN-44