The KRM-262 appears early in the campaign, where it is used by The Player in "New World" to stop the explosion on a train bound for Zurich, Switzerland. Commander John Taylor has a KRM-262 on his back, but is never seen used. It is also seen in the hands of enemies in several missions.

The KRM-262 is the default shotgun that players can use right away. By default, it has a rather large hipfire spread, though the pellet spread becomes much tighter when aiming down the sights. Damage-wise, it deals the highest damage in class, needing only one pellet to kill at extremely close ranges, but when closer to 9 metres, it will require all of its pellets to hit their target to kill them in one shot. After 9 metres, it will always kill in two shots, even with only one pellet due to its sheer amount of flat damage. This makes the KRM-262 a relatively consistent shotgun, never needing more than two shots, though one-shot kills are preferred, as it fires at 60 RPM, or one shot per second. Aiming is recommended for one-shot kills at longer ranges; Quickdraw Handle speeds up the aim speed, while Laser Sight is a viable substitute if one can't be bothered to aim; however, the Laser Sight is unlocked much later than the Quickdraw Handle. Fast Mag might be warranted once it is unlocked, as the KRM-262 is the only shotgun that reloads one shell at a time; Fast Mag will load two shells at once, completing the full reload much more quickly. The other attachments do not add too much utility; Stock will only give a small bonus to strafing speed, Rapid Fire only increases fire rate by 6%, Long Barrel does not significantly increase its one-shot kill range, Suppressor significantly cuts its one-shot kill range, and optical attachments are not needed at all for close range weapons like shotguns. Extended Mags delays the need to reload, but it does not change its horrid reload speed.

The KRM-262 is available in Shadows of Evil, The Giant, Der Eisendrache, Zetsubou No Shima, Gorod Krovi, and Revelations as a wall weapon for 750 points. It appears in Shadows of Evil in the Junction, near the access to the inner district as well as on the roof of the building leading to the entrance of Nero's Lair, The Giant on the wall where the Double-Barreled Shotgun had been on Der Riese, and in Der Eisendrache next to a broken bridge close to Double Tap as well as on the wall next to the debris in the room used for the Rune Prison upgrade path for the Wrath of the Ancients, and Revelations in the right tunnel at the start of the Origins segment. It provides a reliable one-hit-kill up to round 8, but eventually become subpar due to its slow fire rate and reload times, which Double Tap and Speed Cola perks can support a fair amount. The KRM-262 is a poor choice as a starting weapon, as points are very hard to get, and it will be close to useless after round 8. One should favour the RK5, Sheiva, or L-CAR 9 as they are much better at gaining points. However, the KRM-262 is effective at taking out the Margwa on Shadows of Evil, requiring only 1 shot for each head up to the 3rd Margwa which spawns based on rounds.

The KRM-262 surpasses the other starting weapons greatly when Pack-a-Punched. It becomes the Dagon's Glare when upgraded, gaining a massive increase in damage, surpassing all other shotguns, even the Gut Shot from World at War. The pump action is sped up tremendously, allowing the weapon to be fired almost as quickly as a semi-automatic weapon. The magazine is increased to 16, with little reserve ammo at 64, but ammo can be bought off the wall. The Dagon's Glare has a unique reload pattern. While the animation remains the same, the first round loaded will count as eight rounds, while the second and third rounds will count as four each for a total of sixteen on a dry reload. The Dagon's Glare is extremely effective against the Panzersoldat on Der Eisendrache, reducing it in mere seconds even up to round 50. Damage-wise, the Dagon's Glare beats all shotguns, but if one is short of points, ammo will be a concern.

The KRM-262 is available as a power-up weapon in Dead Ops Arcade 2: Cyber's Avengening, replacing the SPAS-12 from the original Dead Ops Arcade. It can fire in fully automatic mode, making it devastating at close range. Throughout the Black Ops III Zombies storyline, it seems to be the Origins Nikolai Belinski's favorite gun as he is seen in all map cutscenes with one except for Zetsubou No Shima where he has a KN-44 instead. He would use his KRM-262 to execute the Original timeline Nikolai after the former attempts to kill him with a concealed MR6, in Gorod Krovi.

The KRM-262 in first-person view 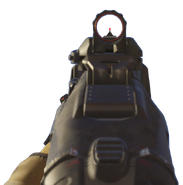 The KRM-262 in third person

The KRM-262 returns in Call of Duty: Mobile. It was added as part of the Season 3 update.

It is functionally similar to the Black Ops III variant, the only differences being a wider variety of attachments and not being a guaranteed two shot kill over longer ranges. With Gunsmith, the player can equip attachments such as Sawed-Off Barrel and No Stock to significantly increase movement and ADS speed, making it an effective run-and-gun weapon while sacrificing range, though this can be somewhat lessened by a Choke or Marauder Suppressor. It is also capable of high range with the right attachments, boasting an insane one shot kill range of 55[1] meters to the head with an Extended Barrel, Marauder Suppressor, and 500g Slugs, even while hipfiring. Like with most shotguns, the pellet spread is significantly reduced when aiming down the sights, making the one-shot kill more consistent.

The KRM-262 can guarantee a one-hit kill at close range on enemies without body armor and at 100 HP. It is available on the floor as Common and Rare blueprints.