This shotgun appears in the mission "Karma" in a security weapons cache. After completing the mission "Odysseus", the player can select it for use anytime before a mission. In the campaign, it fires buckshot (just like the KSG 12 in Modern Warfare 3), unlike its multiplayer and zombies counterparts, which fires slugs.

The KSG is unlocked at Level 34. It is the third shotgun available to unlock. It is the only shotgun in the game to fire slugs instead of standard buckshot ammunition that is fired by other shotguns. As a result, its range is superior to all the other shotguns, killing in one to two shots at medium range. However, since it only fires a single slug, it is considerably harder to land shots on targets compared to other shotguns. Aiming down the sights is beneficial, though it has high hipfire accuracy which can be highly useful in close quarters as the player is not incapacitated by the lower movement and aiming speed or peripheral vision caused by aiming down the sights. It is also strongly recommended not to crouch or prone then shoot immediately as the shot will be inaccurate. At the edge of its effective range, the KSG will kill in one shot if it is a headshot or two regular shots, so it is possible to kill enemies at a surprising distance.

The Long Barrel is an excellent attachment for this weapon as it increases the KSG's effective range even further, making for an unparalleled one-shot kill range in the shotgun class, as well as increasing effectiveness at medium range. The Quickdraw Handle and Reflex Sight are also useful should the player rely on aiming down the sights. On the contrary, the Laser Sight is an effective choice as the even higher hipfire accuracy can prove useful if the player is unable to aim in a tight situation. The Adjustable Stock can be an effective choice, as aiming down the sights with this weapon is generally more effective than hip-firing, but because the Stock only boosts movement speed while ADS for shotguns from 80% to 88%, the benefit is minimal. The Suppressor on this weapon slightly lowers its range and one-hit-kill ability, but still is capable of executing silent kills at decent ranges. The use of Fast Mag permits two shotgun shells to be inserted simultaneously, effectively halving its reload time, although this usually is not needed since the KSG has a very high magazine capacity of 14 rounds and a low fire rate, making reloads uncommon, especially during combat. The Millimeter Scanner can be used to great effect on maps with lots of thin cover, due to its unusually high penetration (compared to the buckshot shotguns) and high damage per slug.

The KSG is the fourth weapon tier in Gun Game, where it is equipped with the Quickdraw Handle attachment.

In Origins, the KSG is available for purchase from the Mystery Box for 950 points (10 points on a Fire Sale) or received for free from the dig spots if the player has a Golden Shovel (although the chances of digging it up are slim). Just like the Multiplayer counterpart of the weapon, it shoots slugs instead of buckshot rounds, reducing the pellet count to 1, but trading it off for increased damage. Because of the slugs included in the weapon, it sports very high damage that can be effective in the later rounds if aiming for the head. In addition, it has a very high amount of ammunition, at a total of 70 slugs, counting all of the slugs that are first inserted in the weapon. When Pack-A-Punched, it becomes the Mist Maker, resulting in a doubled magazine size and reserve ammo capacity of 28 and 112, respectively, as well as the ability to load two shells at a time when reloading, the addition of a Reflex Sight, and higher damage, making it a one hit kill until around rounds 30-32 (including headshots) with Double Tap Root Beer II, otherwise, it is effective until Round 30, making it one of the most powerful weapons that is not a Wonder Weapon, and subsequently one of the most powerful shotguns featured in Zombies. The reason why the Mist Maker is very powerful in comparison to the Pack-a-Punched regular weapons (i.e. Executioner/Voice of Justice) in terms of overall power is that it fires a highly concentrated slug rather than multiple buckshot pellets, making for a very high damage in a single shot, and it has a very high ammunition capacity for its power. It can shoot for a maximum of 5000 damage per shot, and a minimum of 3750.

The KSG in first-person. 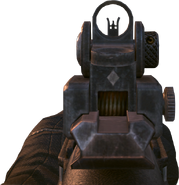 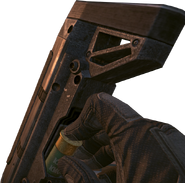 The KSG's icon on ELITE.

The Mist Maker in first person.