The KSP 45 is a burst-fire submachine gun featured in Call of Duty: Black Ops Cold War.

The KSP 45 can be brought into any map via Create-A-Class, at Loadout rarity or at any rarity via the Mystery Box for 950 Essence. Within Firebase Z, It can be found in the "Data Center" as a Wall Gun costing 2,250 Essence coming with 3 attachments and at Rare Rarity. When upgraded via the Pack-a-Punch Machine, it becomes the Herald of Woe. 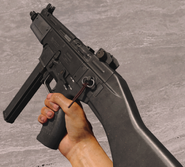