"AHAHAHAHAHA! Do you hear the sound of thunder?!"
— Richtofen when killing Zombies with the KT-4.

The KT-4, also known as the Kusanagi-no-Tsurugi, is a buildable Wonder Weapon that appears in the map Zetsubou No Shima. It fires a green liquid that causes spore bags to grow on standard zombies before exploding, it causes Thrasher spore bags to pop and will instantly explode Spiders. This liquid also can effect the various fauna of the map, with the projectile acting as fertiliser for the Seeds and causing the spore bags to produce blue spores which temporarily increase speed along with increased sprint duration, at the cost of a much extended rest time.

These shots can be charged up to three times, which causes the liquid to remain on the floor, bubbling and affecting any zombie that goes over it. This charge can be cancelled by meleeing.

The KT-4 can be found in the Bunker but requires unique ammo that needs three ingredients to be crafted. The ingredients are:

With the ingredients in tow, they can be mixed in the KT-4 bench, allowing the KT-4 to be picked up and to start spawning in the Mystery Box.

The KT-4 cannot be upgraded via the Pack-a-Punch Machine but requires a more potent ammo to be crafted in the secondary bench. The ingredients for that are:

These can be processed in the other bench to create the ammo utilised in the Masamune. 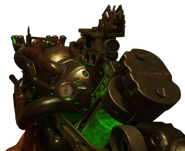 First person view of the KT-4

Aiming down the sights of the KT-4

The parts to craft the KT-4.

The serum needed to craft the KT-4 being taken from a Spider. 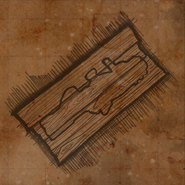 A drawing of the outline of the KT-4 as seen in the Zombies Chronicles timeline poster.