Call of Duty Wiki
Register
Don't have an account?
Sign In
Advertisement
in: Call of Duty: Advanced Warfare Factions
English

The KVA is a paramilitary terrorist organization featured in Call of Duty: Advanced Warfare. Between the missions "Atlas" and "Manhunt", they are the main enemy faction.

The KVA was founded in 2041 by Joseph Chkheidze from Chechnya, whose anti-western writings and speeches were an inspiration to many people across the globe.[1] With this power, he was able to transform the KVA into a shockingly violent terrorist organization that the world would come to know.

Eventually taking the name "Hades", under his leadership, the KVA became more powerful and secretive than ever. KVA cells followed an asymmetric ordering structure with lateral points of command, allowing the group to maintain upmost secrecy and be untraceable. By then, the KVA was now the world's leading anti-western terrorist organization, their main goal being rebirth of the world through the death of technology and punishing humanity for their dependence on it. The KVA were active all around the globe, conducting many terrorist attacks against the West and inflicting large numbers of military and civilian casualties. Their most prominent include assaults on Oslo in Norway, Mozambique in Africa,[2] Lagos in Nigeria and the catastrophic April 28, 2055 Terrorist Attacks, destroying nuclear reactors around the globe in an attempt to plunge the world into darkness. After the capture of Dr. Pierre Danois in Detroit, Atlas located Hades and the KVA in Santorini, Greece and attempt to kill him. They succeed in assassinating him, but before his death, Hades gave Mitchell a data chip containing intel detailing how Irons let the KVA attack happen. They are then mentioned in Utopia, stating that Atlas took down another KVA cell.

A KVA Soldier with plain clothes in Santorini, Greece. 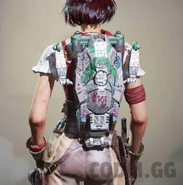 A KVA Recon in Call of Duty: Mobile.