"In the cadre of stars that made up the Atlas Corporation executive board, Kahn shined like a terrible fireball, consuming anyone that dare meet him at the negotiating table. A true closer, he was known to show no mercy to friend or foe. This tactic likely lead to Kahn's peers insisting that he be "promoted" to Head of Research at an Atlas genetics facility in the middle of nowhere. For a long time company man like Kahn, it's career homicide in the making."
— Biography

Kahn is one of the four main playable characters in the Exo Zombies maps Outbreak, Infection, Carrier and Descent. He is portrayed and voiced by Bill Paxton.

Kahn was formerly a big name within the executive board of the Atlas Corporation. However, in his career, he made one fatal mistake, which led him to lose an important deal with a client that cost Atlas billions of dollars. However, instead of being fired, he was "promoted" to Head of Research at the Atlas Biogenesis Research and Development Facility. Unbeknownst to him, Atlas had used the facility as a containment for their infected specimens, including former Sentinel Task Force soldier Oz, who possessed special genetic features that made him somewhat immune to Atlas' Manticore virus. He, along with two other Atlas employees, Lilith Swann and Jim Decker, also have similar features to Oz, and thus became perfect test subjects for Atlas.

On one night, a zombie outbreak occurs in Kahn's facility, prompting him to call up security. He then attempts to evacuate, but then finds the rescue Warbird being attacked by zombies and crashing down onto the facility. He is then forced to cooperate with Lilith, Decker and Oz (who was brainwashed into believing he was a janitor working at Kahn's facility), in order to survive. In an attempt to escape, all four survivors retrieve their employee keycards, and use them to call in a second Warbird for extraction. However, as the Warbird approaches the facility, it is shot down by a incoming supply drop, leaving the four survivors stranded. They eventually make a last stand against the zombies, but are defeated. Atlas forces arrive and save them in the nick of time, then transport them to a facility located near a Burger Town restaurant.

Some times later, they recover and find themselves in the midst of another zombie infection. Not only do they have to fend off the undead, but they also have to rescue civilians trapped in the vicinity of Burger Town. The four survivors eventually find a way to activate the Burger Town mascot, Bubby, which either comes to life and aides them in battle, or just simply explodes. While doing this, they also unknowingly launch a missile. After, while fighting on the roof of the restraunt, they are stopped and taken captive by Sentinel forces. Their leader, Lennox, points a pistol at them and claims one of the four must die. Oz is then executed in front of Kahn and the other two. The trio are then taken to an Atlas aircraft carrier somewhere off the coast.

While on the ship, the team finds several diagrams depicting Oz as "Patient Zero", prompting Lennox to reveal to them about Oz's real past, and how he wound up in Kahn's facility, as well as why they were special to Atlas. They also discover some data tablets, containing the journal of the ship's former captain. Having learned the truth about what happened, the team then decides to sink the ship by setting it to detonate. However, as they prepare for extraction, they encounter Oz, who has reanimated and become a zombie.

As the four escape from the burning remnants of the ship, they discuss their next move. They all come to an agreement that Oz must be eliminated, and thus head to the Trident Retreat, where Oz had arrived before them in order to exact his vengeance on Atlas. Upon arriving, the group is forced to perform a series of challenges, set by Oz, before being teleported into a digital recreation of his memory. They finally confront Oz, who mutates into a horrific monstrous form. After a long ensuing battle, Oz is killed. Lilith then takes it upon herself and uses a flamethrower to burn his mutated corpse, while swearing vengeance on Atlas for what they did to him.

In the aftermath of the incident, Kahn resigns from Atlas, and takes the fight against them to court, after having gathered a substantial amount of evidence of their activities. Unbeknownst to him and the others, Atlas had already created a large amount of Oz clones, stored beneath the Trident facility.

Kahn with Oz, Decker, and Lilith. 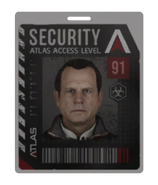 Kahn leading the group to an emergency pod.

Retrieved from "https://callofduty.fandom.com/wiki/Kahn?oldid=2491518"
Community content is available under CC-BY-SA unless otherwise noted.