Vladimir Makarov by a detonated explosion

Kamarov was born a Russian citizen during an unknown time period. He later on joined the Russian military and rose to the rank of a Sergeant. During his time as a Sergeant, he would often assist a British SAS team under the command of Captain John Price.

During the Second Russian Civil War, Kamarov sided with the Loyalists against the Ultranationalists. When Captain Price needed some assistance getting to a former Ultranationalist informant, codenamed "Nikolai", Price contacted the now Loyalist Sergeant Kamarov to assist them. Nikolai was being held in a town in the Caucasus Mountains, So Price, Soap, and Gaz met with Kamarov near the town.

The town was already under attack by Kamarov's men by the time Price's team arrives, so Kamarov asked for their assistance instead of taking them directly to Nikolai. Soap, using a sniper, picked off a few men so Kamarov's forces to push deeper. Kamarov again took them to another spot to snipe, but this angered Gaz enough to threaten Kamarov to take them to Nikolai. Kamarov informed them where Nikolai was, and the team went well on their way, but Kamarov stayed behind to watch over the battle.

After Al-Asad detonates a nuke, Price contacts Kamarov again, asking him to assist in capturing Imran Zakhaev's son, Viktor. At this point, all hard feelings between Kamarov and Price has seemed to worn off. Kamarov met Price and his squad near an outpost Viktor was going to pass through in a few hours. Soap was designated sniper again and took out the guards in a tower. After a short firefight, they eliminated all the guards stationed there. Price tells them a plan to capture Viktor and they set it into motion. Both Kamarov's and Price's men disguised themselves as Ultranationalist troops and waited for Viktor.

When Viktor's convoy finally arrived, they attacked the convoy. However, Viktor then rammed his car into the watchtower where Staff Sergeant Griggs and Soap were hiding. This allowed Viktor to escape. After a long and lengthy chase, Kamarov's and Price's men finally cornered Viktor Zakhaev and Soap was ordered to apprehend him. However, Viktor committed suicide before they could.

After a joint operation destroyed the nukes Imran Zakhaev launched overseas Price, Soap, Gaz, and Griggs fled the launch facility, only to have the bridge vital to their escape blown up. During their firefight on the bridge, Price contacted Baseplate only to be denied help. Kamarov contacted Price stating "I understand you and your men could use some help." However, while Kamarov was en route, a tanker blew up and knocked everyone down. Imran Zakhaev appeared on the bridge but was soon shot dead by Soap.

Right after Zakhaev was killed, Kamarov arrived in a bunch of helicopters to rescue the remaining team. Griggs and Gaz were killed, and Price and Soap were wounded. Kamarov took them from the bridge and to a hospital where they recovered.

Five years later, when the fighting was going on throughout the world in World War III, Kamarov had traveled to the Czech Republic and had joined the Czech Resistance. When Russia invaded the Czech Republic, Kamarov was commanding the resistance in retaliation to their invasion. During this rebellion, Kamarov was contacted by his old friend, John Price, who was a Task Force 141 member that had just been disbanded following General Shepherd's betrayal. Price once again needed Kamarov's help, this time in assassinating Vladimir Makarov. Kamarov helped Price, Soap, and newfound ally Yuri sneak into the city and fight their way to the church they were supposed to hide in.

The plan was for Soap and Yuri to hide in the nearby church tower while Price infiltrated a hotel where Makarov was supposedly going to meet his advisors. Kamarov was supposed to give the go ahead in the operation, but failed to do so when his moment came. Soap remarked that Kamarov probably forgot to switch the radio on and Price said to move on with the plan. After Price infiltrated the main room of the hotel, an elevator door opened. When the door opened, it revealed Kamarov strapped to a chair with C4 strapped all over his body. His last words being, "I'm sorry Price." Makarov comes on the radio saying, "Captain Price, ад ждёт тебя" ("Hell awaits you.") Makarov detonated the C4, killing Kamarov, but Price managed to escape.

Kamarov appears in Call of Duty: Mobile and was added during Season 9: Conquest as part of the "Covert Crate".

A disguised Kamarov in "The Sins of the Father".

Kamarov in "The Sins of the Father".

Kamarov in "Game Over".

Kamarov's last moments before his death in "Blood Brothers".

Soap's drawing of Kamarov in his journal. 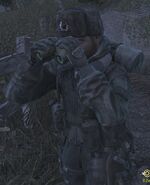 Kamarov looking through his binoculars.

Kamarov as he appears along with Cpt. Price in "Blackout" 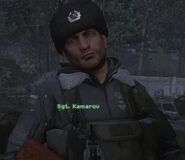 Kamarov in "The Sins of The Father" (Modern Warfare Remastered)