TEC-9, Any weapon obtained by the player

Sai, Any equipment obtained by the player

Born on December 12th, 1956 in Kobe in the Hyōgo Prefecture of Japan, Kaori Tanaka was the daughter of Kobe's most feared Yakuza boss. Not wanting to let her family name opened doors for her, Kitsune earned the respect of every boss in Kobe by the age of 15. Contemptuous of the political games played by her brothers and resentfully frustrated by the fact she's unable to join their ranks due to her gender, Kitsune spent her time learning about cybersecurity among local underground criminal groups. She also trained in martial arts under the instruction of her bodyguards.

By the age of 21, she became the most prolific cat burglar in Kobe, targeting tech companies thinking their new security systems were unbreachable. Even the Public Security Intelligence Agency filed her as one of Japan's top cybercriminals. But her ambition and talent, along with tensions within her family, made her joined Perseus.

On July 23, 1984, after having received the data of the improved Number Program from Freya Helvig, Kitsune was tasked to infiltrate an Echelon NATO listening station on Teufelsberg in West Berlin. Fighting her way to the control room, she managed to hijacked the system and start the broadcast as a team led by Frank Woods and Colton Greenfield arrived at the site. With the broadcast active, operatives started to turn on each other. Greenfield managed to eliminate several operatives before escaping through a window with Woods. From Verdansk, Vikhor Kuzmin congratulated Kitsune for the successful operation as she was leaving the station on board of a helicopter protected by a team of turned operatives. 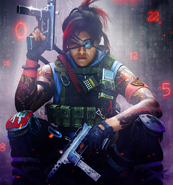