LC10, Magnum, any weapon obtained by the player

"A former warlord, grown rich trafficking drugs and weapons through the Golden Triangle. Feared by his men for his temper and brutality. Recruited by Perseus to move WMDs around the globe using his established supply lines."
— In-game biography

Naga was a former warlord and drug cartel boss who after a power grab, made a fortune from the trafficking of illicit narcotics and weapons in the war-torn Golden Triangle and whose authority made him feared, even by his own men, for his reputation of being furiously short tempered and his ruthless brutality, which led him to be recruited as a member of Perseus. Using his established supply lines, Naga smuggled and distributed Nova 6 gas throughout Laos and around the globe.

On April 19, 1984, three months after Russell Adler was taken prisoner by Vikhor "Stitch" Kuzmin, a rescue team led by Frank Woods arrived in Laos. Naga warned Stitch about their arrival and confirmed that Adler was secured and was currently headed to him in Verdansk. Stitch then ordered Naga to make the team believed they cared about their Nova 6 supply lines.

Naga appears in Call of Duty: Mobile and was added on June 7, 2022 during Season 5: Tropical Vision as part of the Dark of the Wilds Lucky Box. 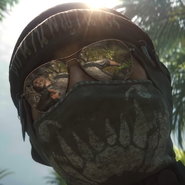 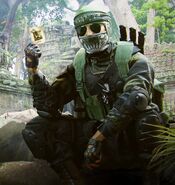 Naga as an operator in Multiplayer.

Naga in Ghosts of Verdansk wearing the Ghost of War skin.

Naga with the Ghost of War skin, in-game.

Naga with the Ghost of War skin in the Zombies lobby