For a similar knife, see Tidal.

It is used in the campaign mission "Executive Order" to kill a Russian soldier by sticking it into the base of his skull, killing him instantly, allowing Mason and Woods to take their uniforms and infiltrate the launch site.

Bringing out the Karambit Knife 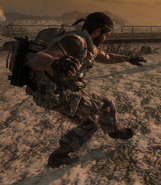 Frank Woods stabbing a guard with a Karambit Knife

The Karambit Knife's only appearance in Call of Duty: Black Ops II is when it is used by Woods in the mission "Old Wounds" to torture Kravchenko.

The Karambit Knife is available as a standalone melee weapon in Call of Duty: Modern Warfare Remastered, and is referred to as the Diabolical. It was added to the game with the May 2nd, 2017 update.

The Karambit appears in the form of Rare and Epic blueprints for the Base Melee in Call of Duty: Mobile.

A Karambit Knife is used in the Raptor Rage Finishing Move.