R1 Shadowhunter, any weapon obtained by the player

"As a child Rivas saw firsthand the deadly consequences that the Menendez Cartel's wars with rival gangs had on their neighboring communities. She has dedicated her life to ridding her country of the Cartel's influence."
— In-game biography

Born on September 14, 1955, Karla Rivas grew up in a small village near El Empalme in the Nicaraguan region of León. Rivas spent much of her childhood accompanying her migrant worker parents as they were working in different farms and plantations.

The Menendez Cartel provided an economic lifeline in the region and as one of the older children, Rivas was regularly assigned to look over other workers' children while their parents were working in fields. Rivas also watched over Josefina Menendez whenever her father Jose Luiz was leaving to tour the cartel's operations. [1]

However, Rivas witnessed over the years the hard toll on the locals caught in the crossfire of the cartel ongoing wars leaving many families without parents, grandparents or siblings. She realized that as long as the cartels were making money, paying off the authorities to turn a blind eye, the death toll would continue to climb. After barely escaping a massacre, Rivas left her home and join a group of partisan fighters dedicated to disrupting cartel operations and drive them out of Nicaragua.

Her experience as a guerilla warfare specialist allowed her to take part in the CIA strike team led by Frank Woods in search of Russell Adler in the Golden Triangle near Laos on April 19, 1984. The mission, however, was unsuccessful as Adler was already taken away and sent to Verdansk.

Rivas appears in Call of Duty: Mobile and was added as part of the Season 5: Tropical Vision Battle Pass. [2] 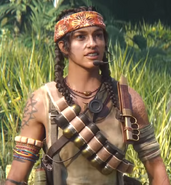