• Get through security checkpoint

For the character known as Karma, see Chloe "Karma" Lynch.

"JSOC learns from the surveillance gathered in Pakistan that Menendez has hidden a Celerium based cyber weapon called "Karma" on the floating city COLOSSUS."
— Mission description

"Karma" is the sixth mission in the Call of Duty: Black Ops II single-player campaign. The player takes control of David Mason as he, along with Harper and Salazar infiltrate Colossus, a high-end exotic island getaway, to find out about "Karma" and its connection to Menendez's plans.

The mission starts with David Mason, Mike Harper and Salazar arriving on Colossus resort in the Cayman Islands on a VTOL passenger plane. Posing as union inspectors, the trio are briefed by Farid that they will have to shoot their way through security forces to access the Central Records Computer (CRC), located in the heart of Colossus, and obtain intel on the supposed cyberweapon, Karma.

After being briefed in the elevator on their tasks, Harper exits first and bumps into a woman, comically trying to hit on her before getting cursed at. Mason and Salazar continue taking the elevator to the lower levels, where they bump into some security. Failing to maintain their cover towards the security guards, Mason and Salazar take them out. They then move towards a ventilation shaft, where Mason opens his briefcase and deploys Ziggy, a small but agile robot spider.

After Ziggy crawls through the vents, a small group of enemies are seen planting explosives on some gas pipes. Section asks himself what they were doing. Ziggy then proceeds to gain access to the CRC Room, it jumps on a guard and incapacitates him, thereafter crawling up to the guard’s eye to obtain his retina scan. Shortly after obtaining the retina scan, Ziggy is discovered by another guard and crushed under his foot. Mason and Salazar then move towards the entrance to the CRC Room. After gaining access to the room using the retina scan, Mason and Salazar take out all the security guards. They then search for Karma on the CRC. After a quick search on the database, Karma is revealed to be not a cyberweapon, but in fact a woman by the name of Chloe Lynch. After accessing her bio, the computer informs Mason and Salazar that Chloe is at Club Solar.

Mason and Salazar fight their way through security forces waiting for them outside the entrance to the CRC Room, and inform Harper about Chloe, whom he recognizes as the girl he bumped into earlier. Mason informs him to secure Chloe at Club Solar. After Mason and Salazar eliminate all the guards, they split up and go in different elevators to secure Chloe. As Mason walks towards Club Solar, he receives camera feed from Harper trying to convince Chloe to follow him. When Mason finally reaches the dance floor, he tries to extract Chloe as well, but not before DeFalco storms the club and kills the DJ. Grabbing a clubber as hostage, he futilely asks for Chloe before executing the hostage. DeFalco then grabs another hostage and threatens to kill her as well should Karma not show herself. Not wanting to cause another death, Chloe breaks free of Harper’s hold and surrenders herself. DeFalco then orders his men to open fire on the crowd. During this, explosives were set off as a distraction.

Harper and Mason take cover behind the bar counter, and afterwards, engage the enemies in the club over several slow-motion sequences. After killing all the enemies in the club, Mason hurriedly searches for DeFalco and Karma of the security cameras. Finding them heading across the mall to the Evac Bay, Mason and his team set off in hot pursuit, attempting to catch up to DeFalco before he gets away with Chloe.

Mason manages to catch up to DeFalco right before he reaches the entrance to the Evac Bay. DeFalco, along with his men, turn around and engage Mason in a fierce firefight. Ultimately, Mason takes out DeFalco and saves Karma (though he can shoot him from far away without actually catching up with him). The mission ends with the team securing Karma, dragging DeFalco's corpse into their VTOL and making their way to extraction.

Mason fails to catch DeFalco before he reaches the Evac Bay. Mason rushes to the bay only to find DeFalco’s VTOL aircraft taking off, with Harper and Salazar futilely firing at the aircraft. Mason remarks that they have to hurry back to the U.S.S. Barack Obama and find out what Karma’s connection is to Menendez’s plans. This ending unlocks the level "Second Chance" for another attempt to rescue Karma. 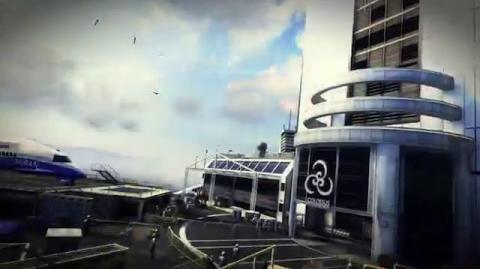 PDW-57 with EOTech and Suppressor

KAP-40 with Reflex Sight (only used in the Club Solar)

M27 (Used by Harper and Salazar)

Javier Salazar, David Mason and Mike Harper before going on the mission.

Harper and Salazar before going in Colossus.

Approaching Colossus with an AGR watching on.

Colossus Resort. Note the 2D sprites near the pool.

Ambushing a guard with Ziggy.

Disarming and stabbing a guard.

The dancefloor where Chloe is.

Circling the dance floor while taking out hostiles.

Harper telling the security guard chief to ready his men.

Chaos in the mall.