The Karma-45 (referred to as CRB in the game files) is a submachine gun featured in Call of Duty: Infinite Warfare. It has built-in dual magazines, allowing the weapon to have tactical faster reloads. The Karma-45 resembles the Vector from previous games, but appears to be double-barreled.

When all side missions are completed, the Karma-45 unlocks the High-Cal Burst upgrade, which enables a burst-fire that increases damage per accurate shot.

The Karma-45 is unlocked at level 9; it is the third submachine gun to be unlocked. The Karma-45 is fitted with its own sight featuring an orange reticle on a yellow tinted lens. Its built-in dual magazine means that only one magazine needs to be changed if the player has fired half or less than half of the 42-round capacity; otherwise both will be changed, while loading one at a time.

The Karma-45 appears in Zombies. It is available from a wall buy for 1250 points. When Pack-a-Punched, it becomes the Fate's Hand, featuring a combined magazine capacity of 40 rounds.

The Karma-45 in first person 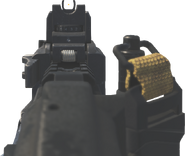 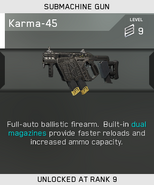 The Karma-45 being unlocked in multiplayer