Call of Duty Wiki
Register
Don't have an account?
Sign In
Advertisement
in: Call of Duty: Ghosts Launchers
English

For the underbarrel variants, see GP-25 and GP-30.

The Kastet is a grenade launcher that appears in Call of Duty: Ghosts. It fires grenades that explode on impact.

The Kastet is not available in the campaign, but it appears in multiplayer, and it costs three Squad Points, or can be unlocked for free by choosing the Heavy pre-set class when first creating a character. The weapon can be fired without aiming down the sights, unlike most stand-alone grenade launchers from the previous Call of Duty games. It can be better than the MK32 in certain situations, since unlike the Kastet, the MK32's grenades do not explode on impact, and that the MK32 costs three times more to unlock (nine points for MK32); however, the Kastet has only a third of the ammunition compared to the MK32, and must reload, unlike the MK32.  Compared to the Panzerfaust, the Kastet is better against infantry rather than enemy pointstreaks, but the Panzerfaust is still only good to a certain point because it is free-firing and loses its accuracy over range, eventually spinning out of control. However, using the Kastet at a long range is also difficult, as elevated positions must be compensated for by looking up (as the grenade will make an slight downwards arc when shot), unlike the Panzerfaust which travels in a (usually) straight line.

The Kastet also appears in Extinction. It costs $2000 in Point of Contact and Mayday, but $1500 in Nightfall and Awakening. In Point of Contact, it is located on a roof in the city. In Nightfall, it is leaning on the security station at the entrance area, near the hive straight ahead from the starting area. In Mayday, it is behind a potential hive in the middle of the cargo area. Compared to the Panzerfaust, it has more starting ammunition (though the maximum ammo is the same), but the Kastet cannot be shot at long range as easily. However, the Panzerfaust eventually loses its accuracy over range, making the Kastet a better choice in these situations.

Much like with the Panzerfaust, the Kastet needs to be resupplied through the use of Team Explosives, and receives no ammo from traditional ammo crate drops. Because the player is forced to use Team Explosives in order to resupply the weapon, it is completely unviable in solo play since it means the player has to pass up on Armor in order to use the Kastet to its full potential. In co-op, the player can usually rely on a teammate providing armor to the team, so the Kastet is much safer to use in co-op play where the player is much more comfortable providing their own ammo for the Kastet while also supporting the team with a supply of lethal slot items. It is most ideally used by an Engineer so as to maximize the per shot explosive damage of the Kastet. 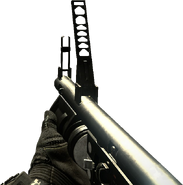 The Kastet in first-person view.

The Kastet on a player's back.