The katana is unusable by the player and only seen being wielded by some Japanese soldiers during certain parts of the campaign mode. In the first mission, "Semper Fi", a Japanese soldier playing dead might stab Rooker (depending on the player's actions) with a katana. Another slashes Miller across the shoulder with a katana as he tries to escape with the other Marines. Also, in the last part of "Little Resistance", Sgt. Tom Sullivan gets killed by a Japanese Banzai Charger wielding a katana. Katanas are usually replaced with the Bayonet by the Japanese soldiers, however they can be seen on some of the soldiers' uniforms even if they are not used.

Examination of the game files reveals the menu and pickup icons for the katana, hinting it was originally going to appear as a usable weapon at some stage of development, at least until it got scrapped.

Model of the Katana 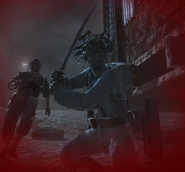 An IJA soldier attacking Miller with his Katana

Another image of Takeo holding his katana

The Katana is available in the multiplayer mode of Call of Duty Online.

The Katana in first person

A player with a Katana in third person

The Katana, labeled as Path of Sorrows is available as a melee weapon in Black Ops III. It was added via an update on September 13th, 2016, and acts in a similar manner to the Fury's Song.

It should be noted that prior to this update, a Katana could actually be seen used by the Specialist Spectre, as part of their Epic Taunt unlocked from the Black Market.

The Path of Sorrows can be obtained within the zombies map Revelations.

In order to obtain the weapon, the player must have progressed through the easter egg until they reach the point where the player can teleport to Samantha's room. Inside the spawn room is a glowing wisp on the headlight of a truck. Grab the wisp and bring it to the teleporter in Kino der Toten and teleport to The House. Inside the room is a custom Mystery Box with a candle on top of it. Place the wisp on the chest and it will sink into it. Grab the Kronorium on the bed and head over to the temple in Shangri-La, where the Path of Sorrows can be found on the wall for 500 points. It is pretty reliable as it can kill zombies with ease in the later rounds and it is a one hit kill until round 42.

NOTE: The wisp should not be picked up until the player can teleport. This is because being hit by a zombie while in possession of the wisp will cause it to be lost for the rest of the match. 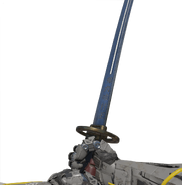 The Path of Sorrows in first person

Picking up the Path of Sorrows 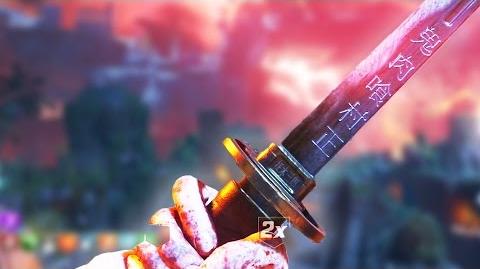 "Slice and dice opponents at an extended range. Press R2 or L2 to attack."
— Multiplayer description

The Katana, referred to as the Kirisute Gomen, can be acquired from the Zombies map Shaolin Shuffle. It can be obtained from the wall of the Black Cat Dojo for free once the player completes the map's main easter egg. In subsequent playthroughs, without completing the easter egg, players can buy the Kirisute Gomen for 10,000 points. It is a very viable weapon, capable of taking out multiple enemies in one swing.

When Pack-a-Punched, it becomes the Sprites of Hell. While in this form, it can send a powerful shockwave after every third swing with the blade. When Pack-a-Punched again if the Alien Fuses have been installed, it becomes the Feral Instinct. Like the Sprites of Hell, it can send out a special ability after each third swing, in this case being a purple ghostly black tiger which can be sent in a single direction dealing infinite damage. The Feral Instinct has 20 ammunition special ability swings, consuming 1 ammo after every ability of the purple ghostly tiger. It is way stronger than the normal Katana, since the normal swing can kill a complete horde if used at the right position, dealing enough damage to kill zombies until 43 with Bang Bangs increasing its melee damage, whilst the first and the second upgrade deals infinite damage from their shots.

On September 26th, 2017, the Katana was added to multiplayer (under its actual name), along with the Nunchucks and the Venom-X.

"Carried by Takeo Masaki through both victory and sacrifice, the Path of Sorrows is a tragic blade with many more tales to tell."
— Description

As in Black Ops III, the Katana is known as the Path of Sorrows, but now it appears as a Special Weapon. By default, it is the Special Weapon of the "Kaminari" class.

While activated, the player gains a large increase to base movement speed. While at level one, it starts with the ability known as Kaze Slash, a simple slashing move that can be done twice in a row. At level two, it unlocks the ability of Merciless Dash, allowing for the player to dash forward with the secondary fire button, dealing heavy damage and stunning heavier enemies. At level three, it unlocks the use of Shadow of Death, turning the player invisible by pressing the Special Ability button. The effect of Shadow of Death can also be deactivated by the same button.

Third-person view of the Path of Sorrows in Call of Duty: Black Ops 4

"Kill opponents by way of the blade."
— Description

The Katana returns in Call of Duty: Mobile. It was added as part of the Season 6 Once Upon a Time in Rust update.

Initially, the weapon appeared in the form of blueprints for the Base Melee, with the first version available being the "Hachi". In September 2021, with the Season 8: 2nd Anniversary update, the Katana became a base weapon.

The Katana makes a brief appearance in Call of Duty: Black Ops Cold War Zombies in the map Firebase Z. In the ending cutscene, Samantha Maxis can be seen with a katana on her back. 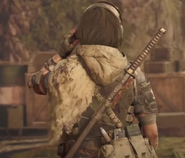 Samantha Maxis, with a katana on her back. 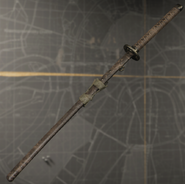 The Katana returns in Call of Duty: Vanguard. It was added as part of the Season One content for the game.

The Katana can be brought into any map via Create-A-Class, at Loadout rarity. When upgraded via the Pack-a-Punch Machine, it becomes Blade of Death, garnering increased melee damage with each subsequent Pack-a-Punch upgrade level.