For other uses, see Recon.

"We're only as good as our intel."
— Katsumi "Recon" Kimura

"Raised in the small town of Higashikawa, Katsumi was expected to enter the family business - sourcing lumber from nearby forests to supply local artists and artisan furniture makers.

He was a loner, who had inherited the hair-trigger temper that ran the family as far back as anyone could trace. During his rages, his Grandfather would calm him by teaching him how to read the I-Ching; the repetitive casting of coins or sticks allowed him to focus, quieting his mind.

In 2038 a virulent flu ripped though Japan and much of the Southern Hemisphere, decimating the population. Katsumi and his Father were the only members of their family that survived. Higashikawa's populace was reduced to triple digits.

As the nation descended into turmoil, Katsumi joined the Japanese Ground Self Defense Force to do his part in restoring and maintaining order, rebuilding what had been lost. He has risen steadily through ranks stripped of older, senior officers - serving as a Recon Scout.

"Intel wins wars. Expose your foes' movements to your team with the powerful intelligence gathering capabilities of your Sensor Darts and Vision Pulse."
— Description 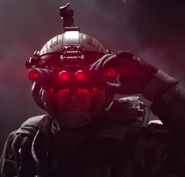