"Watch and learn, kid."
— Keegan to Logan before assaulting the stadium in Struck Down.

Sergeant Keegan P. Russ[1] is a supporting character in Call of Duty: Ghosts. He is a former member of the USMC and the scout sniper for the Ghosts. He is rather quiet and not very social around people, but is known to complete combat operations under extreme conditions.

Keegan joined the United States Marine Corps at a young age and was proficient in rifle training. He later made it into the Force Reconnaissance, attained the rank of Sergeant, and became a Scout Sniper. Sometime later after serving and gaining combat experience on the battlefield, he joined the Ghosts. He was one of the original fifteen, at the time of Operation Sand Viper in 2005.

Keegan continued to serve alongside Elias and Merrick. He would later first be seen on a recon patrol in No Man's Land with Merrick and Ajax. After linking up with recon team callsign Viking, Hesh and Logan's team at the time, they move in to extract Ajax at the stadium. First they recon the stadium, then they assault the facility. During the battle of Fort Santa Monica he is seen near the end of the mission extracting Hesh and Logan.

He participates in a mission to secure a High-Value-Target with intel on Rorke's location. After completing the objective Rorke blows the building and Keegan must extract with Logan and Hesh from the 52nd floor by parachuting out the window which they succeed in doing.

A little later he takes part in the assault on the facility where Rorke is suspected of being. After securing Rorke on their plane they are ambushed and stuck behind enemy lines. Logan regroups with his father Elias and Keegan who proceed with linking up with Hesh and Captain Merrick. After the team regroups they proceed with escaping and evading hostile forces in the area, until being extracted in the river by a forward recon team.

Keegan takes part in hacking a federation facility in the Andes, along with Logan Walker, David "Hesh" Walker, and Thomas Merrick.

Keegan again takes part in the assault of Atlas, an oil-platform near Antarctica.

Next in the mission "Into the Deep", he and Logan are combat divers on a tactical underwater assault mission to take out a Federation destroyer in their naval fleet by hitting it with a portable torpedo. The two soldiers cautiously swim to intercept the target. Engaging enemy combat divers along the way and avoiding sharks. Upon making their way to the target they swim faster to find cover from the dangerous pulse coming from the ships sonar radar. They take refuge in a lighthouse underwater, as the target passes Keegan tells Logan to ready the portable torpedo. Logan readies the torpedo then deploys it, Keegan is responsible for detonation once target is in range and Logan steers. The impact of the explosion creates a massive shockwave which hits the lighthouse knocking Keegan and Logan back and destroying the lighthouse. Logan is pinned under rubble and his rebreather oxygen tube has detached. Keegan hooks up the rebreather for the fellow soldier, and pulls the debris off his team-mate. The two then proceed to escape the strike area while more cargo falls to the depths all around them. Killing more enemy soldiers and avoiding depth charges dropped by the enemy, the two soldiers make their way safely to extraction.

After the successful destruction of the Federation destroyer, Keegan and the other Ghosts are sent to a factory to investigate Federation activity in "End of the Line". They find out that the Federation are making their own kinetic-rod delivery systems similar to ODIN; except in larger numbers. Elias orders an airstrike on the factory, and the Ghosts escape via a ride from Kick just before it happens.

His last appearance was in Sin City. Elias Walker sends him to Colorado Springs for an important mission. But when Federation soldiers are moving to execute Hesh and Merrick, Keegan saves them by firing his L115; first giving Hesh, then Merrick and Logan a chance to break free of their binds and defeat the enemies. He regroups with them, warning them that a large patrol is coming their way. He later meets up with the group and hides in a pantry to take out a guard. He then provides support for the men when fighting to extraction and while protecting Riley. After the mission, he does not appear in later levels.

Keegan appears in Call of Duty: Mobile, and was added on July 7, 2021, during Season 5: In Deep Water as part of the Shadow Lurker Bundle.

Keegan on the Remote Sniper in Struck Down.

Keegan putting on his mask in Federation Day

Keegan in the Single Player Trailer

A close view of Keegan in Federation Day

Keegan sliding across the floor of a collapsing building. 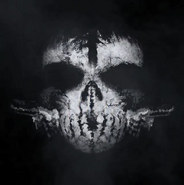 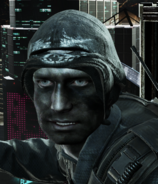 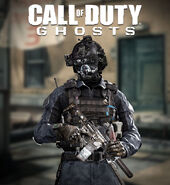