The Keeper Protector is a utility in the Zombies map Revelations. It is essentially a Keeper version of the Civil Protector from Shadows of Evil.

Once all three pieces are collected, assemble the Summoning Altar at one of the areas containing an unfinished altar (Der Eisendrache, Kino der Toten, Verrückt and Origins). Once built, the Keeper Protector can be summoned for 5000 points. 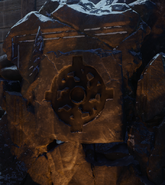