The Kendall 44 (known as Kendall 9mm and LH44[1] in pre-release, and as G18 in the game files) is a Kendall Ballistics pistol in Call of Duty: Infinite Warfare.

The Kendall 44 is the UNSA's service sidearm[2] and is first used to kill an SDF trooper at the start of "Black Sky". It is a common pistol throughout the game, used by both SetDef and SATO troopers as a standard sidearm.

"Part swaps the Kendall 44 into the Hornet, a full-auto variant."
— Description of the Full Auto upgrade

When all side missions are completed, the Kendall 44 unlocks the Full Auto upgrade, which converts it into a fully-automatic pistol similar to the Hornet.

The Kendall 44 is unlocked at level 35. The Kendall 44 is a versatile pistol, capable of providing a quick switch in a panic situation. The integral Lightweight Mold attachment allows the Kendall 44 to sport a much higher hipfire accuracy than other pistols.

In terms of damage, the Kendall 44 is solid, sporting a 3 shot kill potential at short to medium ranges, and a 4 shot potential afterwards. The Rifled Barrel attachment assists in maintaining high damage over range, and coupled with the Hollow Point attachment, creates a lethal secondary over range.

A common tactic used by players is to combine the Laser Sight, Akimbo, Auto Sear and Extended Mag attachments to create a powerful assault class capable of dispatching numerous enemies with little trouble. Dexterity helps in emergency situations when the player is forced to reload to keep the pressure on the enemy team.

Optical attachments on the Kendall 44 are not a necessity, however if precision is a must for long range engagements, the ELO is a viable option.

The Kendall is the starting pistol on Zombies in Spaceland, Shaolin Shuffle and Attack of the Radioactive Thing, and is acquired in the Magic Wheel in Rave in the Redwoods. Like the MR6 and M1911 in previous installments, it can be useful in single-digit rounds for building points and finishing with melee attacks, although the Kendall generally becomes obsolete after the first 3 rounds, even with attachments. It is unlocked for customization at level 8.

When upgraded via the Pack-a-Punch Machine, the Kendall becomes the Baby's Breath, which plays a role similar to the Mustang & Sally, Meat Wagon and Death and Taxes as a pistol which fires grenades. On this first upgrade, the Kendall stays a single-wielded weapon, removing the Akimbo attachment if it is already equipped. When Double Pack-a-Punched, the Baby's Breath becomes the Fire and Brimstone, this time becoming dual-wielded like its predecessors and gaining a 15-round magazine.

Auto Sear and Extended Mags are a highly recommended attachments, as it will convert the Baby's Breath to a full-auto firing mode and negating any loss of ammo for not being akimbo already, making it excellent to take down hordes, much like older pack a punched starting pistols.

Like the previous pistols, the Baby's Breath's grenades deal very high splash damage against the player, making it advisable to either fire from a distance or shoot into groups of zombies. It is also recommended to buy Bombstoppers, as they will negate splash damage. The increased explosive damage makes it a strong choice for dealing with Brutes, which usually go down in 10-15 shots.

Kendall 44 vs Baby's Breath vs Fire and Brimstone 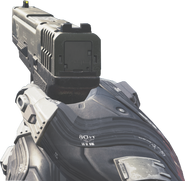 The Kendall 44 in first person 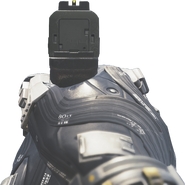 Aiming down the Kendall 44's sights 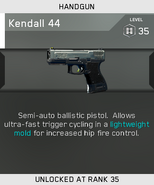 The Kendall 44 being unlocked in multiplayer 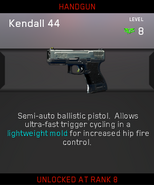 The Kendall 44 being unlocked in Zombies