OSA, Hockey Stick and any weapon obtained by the player

Rave in the Redwoods
Shaolin Shuffle (intro cutscene and reference only)

"Kevin has been catapulted into Rave in the Redwoods by Willard Wyler. Left for dead and forgotten by the reclusive director, Kevin has a different plan. Escape this film any way he can and make Willard pay for what he’s put him through. With the help of our four heroes, together they might be able to put an end to the madness in the Redwoods."
— Official Rave in the Redwoods Biography.

Kevin Smith is a character featured in Call of Duty: Infinite Warfare Zombies, and is a secret unlockable character in Rave in the Redwoods. Much like David Hasselhoff in Zombies in Spaceland, Kevin plays the role of the special celebrity who is trapped inside one of Willard Wyler's movies.

Since childhood, Kevin Smith and his best friend Jason Mewes were fans of Willard Wyler's films. As they made their way into Hollywood, Kevin sought to do sequels and remakes of Wyler's films, while Jay only wished to be part of "the Wyler legacy". One day, both Kevin and Jay were invited to Wyler's private theater to watch exclusive footage of Wyler's film. However, they were greeted by an angry Wyler who claimed that they were ruining the legacy of his films. Both of them were then sent inside Rave in the Redwoods.

Kevin was immediately transformed into a masked killer known as the Slasher, and killed Jason without any memory of his deed afterwards. Kevin isolated himself by staying on Turtle Island, where he finds a safe spot to hide from the zombie hordes. Various people would be sent into the film by Wyler, all of whom met their gruesome demise at the hands of the Slasher. At some points, four actors: Andre, A.J., Sally and Poindexter arrived in the film after having just survived Zombies in Spaceland. Though Kevin initially agrees to help the actors escape the film, eventually he recovers his memories and realizes that he was the one who killed Jason. Kevin transforms into the Super Slasher and attacks the four actors, but is eventually defeated. With his death, he drops a piece of the Soul Key as he sinks into the ground in a fiery blaze.

After completing the main easter egg, enter the following code in the pre-game lobby: right, left, left, down, down, right. 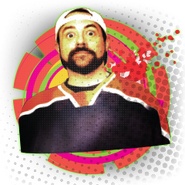