Captain Kevin Sparks was a character in Modern Warfare 2: Ghost.

Growing up, Kevin Sparks' father often bragged about his service in the Vietnam War. His father often used the atrocities that he saw as an excuse to laze around, particularly drinking and watching television. His father's history inspired Kevin to enlist and when he made it into Delta, Sparks told his father about a fabricated story about him killing a man who ate forty babies. His father believed him and never mentioned Vietnam again.

Later in his career, Sparks served in the third Special Ops team that went after Manuel Roba, the C.E.O. of a Mexican drug cartel in Coahuila that was piping heroin into the U.S. and was expanding into terrorist smuggling. On the night before November 1, they made their move and approached Roba's compound, dressed accordingly for the Day of the Dead festival being held there. Sadly, they are betrayed by their commanding officer, Vernon to Roba and are captured and brought to a brainwashing facility.

Around Christmas, Sparks located Riley at the home of Riley's brother, Tommy and his wife, Beth. Sometime later, Sparks and Riley met at a pub for drinks. During their talk, Sparks made Riley increasingly suspicious. Sparks referred to Roba as a friend in a high place, quoted a piece of Roba's advice and even flat-out stated that he wanted to return to Coahuila. When they left the pub, Sparks recognized an attractive woman from the bar, grabbed her and attempted the forced entry of her home where he planned to rape her. However, due to Riley's intentional stalling by fumbling with the woman's purse and house keys, the two men left in a panic after hearing the nearby sirens of the police cars.

Riley and Sparks fled to "The Old Oak Inn" where Sparks was staying. When Sparks requested his anxiety pills, Riley feigned concern and attempted to pull a large knife on Sparks. However, Sparks was already on to Riley and drew a handgun at his head. The two men brawled and Riley gained the upper hand. Riley demanded to know Sparks' motivations and he replied that he just wanted to return to Mexico and Roba. However, Washington arrived at the hotel room and fired a gun at Riley. Sparks and Washington proceeded to kill anyone that was close to Riley as part of Roba's plan to "break" Riley.

Days before they are expected be shipped to Afghanistan, Sparks and Washington moved to R.A.F. Bonnington. Riley infiltrated the base and hacked the computer system to locate their sleeping quarters. Riley killed Washington and kidnapped Sparks to the family home in Manchester where Washington and Sparks murdered his family. Sparks attempted an attack on Riley with a stick, but Riley took notice and shot Sparks at point blank range in the mouth, killing him. Riley burned Sparks' body along with the rest of the house.

Riley with his brother Tommy, their mum, and his nephew, moments before Sparks' arrival. 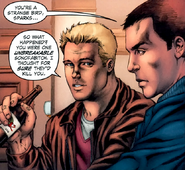 Sparks and Riley talking at the pub.

Sparks' attempted rape of a woman.

Sparks and Washington before they kill Riley's father. 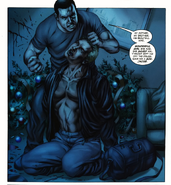 Sparks being punished by Riley before his death.
Add a photo to this gallery

Retrieved from "https://callofduty.fandom.com/wiki/Kevin_Sparks?oldid=2547515"
Community content is available under CC-BY-SA unless otherwise noted.