"No problem, brother. We have more. Plenty more..."
— Al-Asad after being asked about the gas

After the death of the Wolf, Khaled Al-Asad was freed from prison by Victor Zakhaev and seized control of Al-Qatala. Under his leadership, Al-Asad has turned Al-Qatala into an army by using weapons, armored vehicles, and helicopters supplied by Viktor. He is first seen leading Al-Qatala in the invasion of Verdansk. After occupying the city, an alliance was made to oppose him and his army called Armistice.

He is later seen in the TV news station in Verdansk observing the armed conflict between the Coalition and Allegiance after being informed that one of his helicopters carrying gas was shot down, although he ensures the caller that it wasn't a problem as they had plenty of gas.

After several of his operations are destroyed by Armistice, Al-Asad pulled his troops out of Verdansk and deployed massive gas clouds which caused Armistice to fight among themselves. It revealed by an intel file that Al-Asad and his men returned to Urzikstan shortly after the gas was deployed. 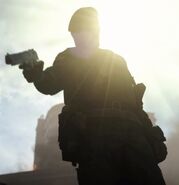