"Men like Al-Asad don't talk unless men like Price beat the words out of them."
— John "Soap" MacTavish

Khaled Al-Asad was born on May 1st, 1963 in Saudi Arabia. Later on, He joined the OpFor, which wasn’t a major threat to anybody at the time. He rose through the ranks of the OpFor until he was the main commander of the faction. When he became the commander, he started to wear his signature glasses and beret. At some point, he met Ultranationalist leader Imran Zakhaev and Al-Asad became one of the so-called “The Four Horsemen”. Al-Asad came to hate the current president, Yasir Al-Fulani, and Zakhaev contacted Al-Asad telling him that he will help him overthrow Al-Fulani in a violent coup d'état in order to keep the United States and Britain away from the Second Russian Civil War.

"This, is how it begins."
— Al-Asad, seconds before shooting Al-Fulani.

During the violent Coup, Al-Asad caused his troops to rally up any citizen still loyal to Al-Fulani and execute them. Al-Asad also captured Al-Fulani and ordered for him to be brought to him. Viktor Zakhaev brought Al-Fulani in a car to a stadium where Al-Asad was broadcasting a speech on national television. Al-Fulani was forced to watch his citizens get executed by Al-Asad’s troops. Al-Fulani was tied to a post and Al-Asad personally executed him with Imran Zakhaev’s Desert Eagle on national television.

"We get Al-Asad, we end this war right here, right now. Lock and load, Marines!"
— Lt. Vasquez before searching for Al-Asad.

Al-Asad assumes control of the region, but in the eyes of the United States, Al-Asad's rule in his nation threatens the whole political stability in the Middle East. The U.S. government sends the military, among them, is the United States Marine Corps Force Reconnaissance, to the Middle East with orders to locate and capture the power-hungry commander. The Marine task force is met by stiff opposition from the OpFor until they locate a television station where Al-Asad is broadcasting his speech, but it turns out that the speech was recorded and Al-Asad has gone into hiding at an unknown location.

The U.S. military assumes that Al-Asad is hiding in the capital city and the main attack force consisting of hundreds of AH-1 Cobra helicopter gunships, CH-46 Sea Knight transport helicopters, M1 Abrams main battle tanks and tens thousands of soldiers are dispatched to assault the capital. Al-Asad is not found in the city, but the Americans locate a Russian-made nuclear warhead in his palace. NEST teams are dispatched to disarm the weapon, but the warhead is detonated by Al-Asad on Vladimir Makarov's orders (revealed in Call of Duty: Modern Warfare 3), wiping out almost the entire U.S. invasion force (confirmed to be at least 30,000 in Call of Duty: Modern Warfare 2). Sergeant Paul Jackson, Lieutenant Volker, Captain "Deadly" Pelayo, and Lieutenant Vasquez are among the victims of the massive nuclear explosion that destroys the capital. Many civilians and OpFor soldiers are killed in the blast leaving no survivors.

"Who then? Give me a name!"
— Captain Price, interrogating Al-Asad before executing him.

Nikolai, a Russian informant to the British Special Air Service, reveals that Al-Asad may be hiding in his safehouse in Azerbaijan, protected by Russian Ultranationalists. Captain Price, Gaz, John "Soap" MacTavish, and several other members of the S.A.S are dispatched to the village where Al-Asad is hiding and are assisted by a Russian Loyalist sent by Sergeant Kamarov. Soon Al-Asad is captured by the SAS and Loyalist. Captain Price ties Al-Asad to a chair and interrogates him, then intercepts a call on Al-Asad's cellphone. Recognizing the caller as Russian Ultranationalist leader Imran Zakhaev, Price kills Al-Asad by shooting him in the head with his M1911. After Al-Asad is killed, the British and Americans realize that the coup and detonation of the nuke were masterminded and funded by Zakhaev, who attempted to draw the attention of the United States from the Second Russian Civil War to ensure his victory over the Loyalist forces.

"Today, we rise again as one nation, in the face of betrayal and corruption! We all trusted this man to deliver our great nation into a new era of prosperity. But like our monarchy before the Revolution, he has been colluding with the West with only self-interest at heart! Collusion breeds slavery! And we shall not be enslaved! The time has come to show our true strength. They underestimate our resolve. Let us show that we do not fear them. As one people, we shall free our brethren from the yoke of foreign oppression! Our armies are strong, and our cause is just. As I speak, our armies are nearing their objectives, by which we will restore the independence of a once-great nation. Our noble crusade has begun. Just as they lay waste to our country, we shall lay waste to theirs. This is how it begins." 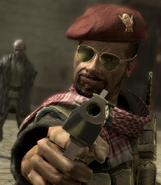 Khaled Al-Asad on the DS version of Call of Duty 4: Modern Warfare 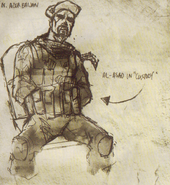 Al-Asad seen in the cutscene before "F.N.G."

An early development poster of Al-Asad

Al-Asad beaten up by Price

Al-Asad as seen in the intro of Modern Warfare 3

Posters of Al-Asad seen in Call of Duty: Modern Warfare 2 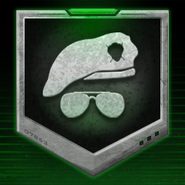 The Remastered version of "The Second Horseman" achievement, depicting Al-Asad's beret and sunglasses.
Add a photo to this gallery 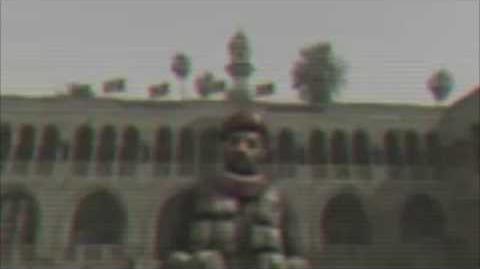 "Today, we rise again as one nation, in the face of betrayal and corruption!"
— Al-Asad

"We all trusted this man to deliver our great nation into a new era of prosperity."
— Al-Asad

"But like our monarchy before the revolution, he has been colluding with the West, with only self-interest at heart."
— Al-Asad

"Collusion breeds slavery! And we shall not be enslaved!"
— Al-Asad

"The time has come to show our true strength. They underestimate our resolve. Let us show that we do not fear them. As one people, we shall free our brethren from the yoke of foreign oppression."
— Al-Asad

"Our armies are strong and our cause is just."
— Al-Asad

"As I speak, our armies are nearing their objective, by which we will restore the independence of a once great nation."
— Al-Asad

"Our noble crusade has begun."
— Al-Asad

Retrieved from "https://callofduty.fandom.com/wiki/Khaled_Al-Asad_(Original)?oldid=2520938"
Community content is available under CC-BY-SA unless otherwise noted.