For other uses, see Kharkov.

Advance through the hail of German gunfire to reach the train station.

"Kharkov 2" (Kharkov Station) is the thirteenth and last campaign mission in Call of Duty: United Offensive. The player must fight through the German defenses to liberate the city of Kharkov.

Yuri starts fighting in the city of Kharkov against Waffen-SS Panzer's and Panzer-Grenadier's.Yuri and fellow Soviet soldier's have to call in the positions of German PaK guns and Elefant tanks destroyers.Then they enter into the heart of the City of Kharkov fighting Waffen-SS Panzers and Panzer-Grenadiers. Yuri must take a captured German Panzerfaust and take out German tanks. The fighting then goes house-to-house, where Yuri and his unit clears the much of the town of German resistance. Yuri arrives at the Kharkov train station and helps to take it, but a massive German counterattack arrives quickly after; Yuri and his squad fight fiercely amidst intense German air, ground, and artillery attacks to hold the station long enough for Soviet support to arrive. At last, after desperate fighting, heavy Soviet reinforcements arrive in the station on a train, and, as the troops and tanks on the train rush out to greet the Germans, a Commissar and his flag-waving attendant rushes atop the train, congratulates the soldiers on their victory, and encourages them onward as the combined might of the Soviet Military chases the last of the retreating Waffen-SS Panzergrenadiers out of Kharkov for good. This part is very similar to the Call of Duty: World at War level "Their Land, Their Blood".

A Waffen-SS Elefant Tank firing at Soviet soldier's during the Battle of Kharkov.
Add a photo to this gallery 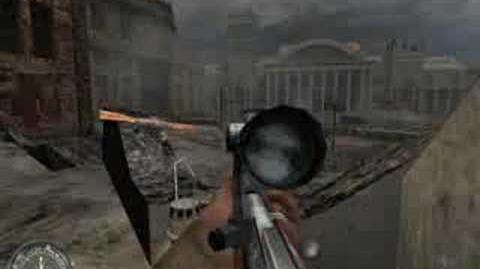 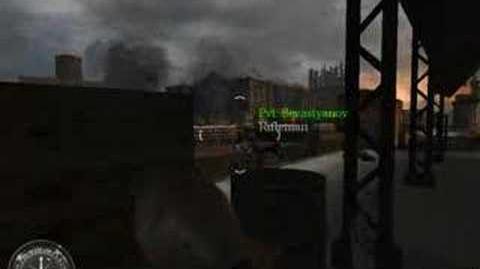 Retrieved from "https://callofduty.fandom.com/wiki/Kharkov_2?oldid=2569574"
Community content is available under CC-BY-SA unless otherwise noted.