"Kick, you'll handle perimeter and security. Nothing and no one gets through."
— Merrick

Kick is a character featured in Call of Duty: Ghosts. He is a member of the Ghosts. He appears in Homecoming, Clockwork, Atlas Falls, and End of the Line.

Not much is known about Kick's military career. It can be implied that Kick is an information technology specialist as he is very skilled with computers and intel.

Although absent on the ground, Kick provided coordinates for Logan Walker, David "Hesh" Walker, Thomas Merrick, and Keegan Russ as they infiltrated a Federation research and development facility high in the Andes mountains.

Kick took part in the assault of Atlas, a Federation-held oil platform in Antarctica, along with Logan, Hesh, Merrick, and Keegan, in order to distract the nearby Federation Third Fleet. Kick and the rest of the Ghosts secured a lower platform, then he and Keegan broke off from the others in order to secure transport for evac. After Merrick and Logan destroyed the platform's pressure regulators, causing the rig to sink, Kick and Keegan safely extracted Merrick, Hesh, and Logan via captured enemy helicopter.

Kick, Logan, Hesh, Merrick, and Keegan stormed a factory occupied by the Federation. Once again, he broke off from the group to obtain a vehicle for exfil. He reappears and evacs the others prior to Elias' airstrikes. 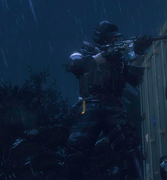 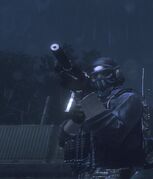 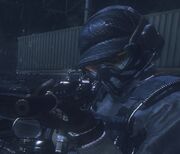 Retrieved from "https://callofduty.fandom.com/wiki/Kick_(Ghosts)?oldid=2471353"
Community content is available under CC-BY-SA unless otherwise noted.