"It doesn'ae look pretty - but it'll get the job done."
— Kieran "Torque" Mackay

Kieran "Torque" Mackay[1] is a character and playable Specialist in Call of Duty: Black Ops 4 multiplayer.

"Born in Leith and treated mostly as an inconvenience by serially unemployed parents, Kieran was left to his own devices, spending his youth exploring junk yards, tinkering with the scrap and broken gadgets he found there.

Quick-witted but exhibiting signature poor judgement, he was always been a prankster; which was constantly landed him in trouble with the authorities.

Eagerly supported by parents keen to get him out of the house, he joined the British Army at 16, and was steered towards the British Engineering Corps, where his naturally affinity for mechanical engineering swiftly earned him a reputation as a fearsome battlefield engineer.

His easygoing, self-effacing humor along with the exemplary quality of his work, are likely the only things that have saved him from extended time in the brig for his ongoing campaign of practical jokes.

"Build Barricades to reinforce your squad's position while deploying Razor Wire to funnel the enemies' movements into your team's crossfire."
— Description

Torque appears in Call of Duty: Mobile and was added on January 2, 2022 during Season 11: Final Snow as part of the Highlands Crate. 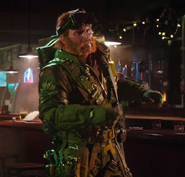