Kindle Pops are a souvenir equipment features in Zombies in Spaceland. It allows the player to block an area from zombies.

Kindle Pops occupy the equipment slot when obtained. They are given from the Souvenir Coin Machine when a player inserts a Red, Blue and a Green Souvenir Coin.

Kindle Pops when used are placed along the floor as the player moves. When completely used, a trail of Kindle Pops will appear. When shot, Kindle Pops catch alight, killing any Zombies that pass through the fire. Players can get damaged by their own Kindle Pops trap.

A render of the Kindle Pops candy. 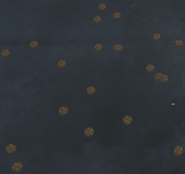 Kindle Pops on the floor.

Kindle Pops icon in the HUD.
Add a photo to this gallery

Retrieved from "https://callofduty.fandom.com/wiki/Kindle_Pops?oldid=2369642"
Community content is available under CC-BY-SA unless otherwise noted.