After all other sub-machine guns are purchased (41)

The Kiparis is seen in the hands of Spetsnaz exclusively, and is available in a weapons cache in "Numbers". Attachments used often are Extended Mags, Dual Wield, or Reflex Sight. It is later seen in the mission "Rebirth".

The Kiparis is the classified SMG in Call of Duty: Black Ops, requiring the purchase of all of the other SMGs, plus itself. It can therefore be unlocked as early as level 41.

The Kiparis is a low damage SMG. It will deal 30 to 20 damage, netting a four to five shot kill. The Kiparis' damage is on the lower end of SMG's. However, the Kiparis holds Assault Rifle grade penetration power to counterbalance this somewhat. The Kiparis' headshot multiplier will reduce the needed shots to kill by one, and in Hardcore, the Kiparis takes one to two shots to kill.

The Kiparis' fire rate is very high for an SMG, at 937 RPM. This makes the Kiparis quite forgiving in close quarters through the virtue of volume of fire.

The Kiparis shares odd accuracy traits. Its iron sights are clean and the Kiparis' kick values are equal to that of the MAC-11 and PM63, but the centerspeed is a pathetic 1400. This makes the recoil climb with automatic fire significantly. On an odd sidenote, the Kiparis, on console platforms, receives Assault rifle grade aim assist, making the Aim Assist effective out to a longer distance.

The Kiparis has a small magazine capacity of twenty rounds. Due to the Kiparis' low damage, this makes reloads very often. As well, the player will only start with 80 rounds total for the Kiparis.

The Kiparis' attachment selection is standard. The optical attachments aren't needed, and the ACOG Scope is a horrible choice, reducing the Kiparis' centerspeed and aim speed even further.

The Grip is extremely useful, adding 200 centerspeed to the Kiparis. This makes the weapon significantly more accurate, and almost on par with the MAC-11.

Extended Mags is a great option on the Kiparis, increasing the magazine capacity to thirty rounds. This makes the player much less likely to have an empty magazine mid gunfight.

The Suppressor is a good fit on the Kiparis, which receives little detriment with reduced range, as the Kiparis is already at a fault in terms of damage output.

The Kiparis is one of the worst SMG's to Dual Wield, as the Kiparis has a lot of hip-fire box recoil compared to the MAC-11 and PM63. Rapid Fire increases the Kiparis' rate of fire to 1250 RPM, but makes for recoil accumulation problems due to the very low centerspeed value. Medium to long range combat becomes a struggle with either of the two attachments.

The cut Pack-A-Punch texture for the Kiparis 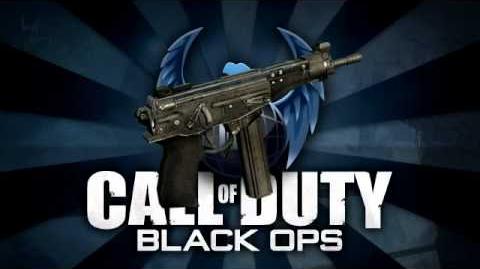 The Kiparis returns in Call of Duty: Black Ops Cold War as the OTs 9. It was added as part of the Season Four Reloaded content for the game.

The OTs 9 can be brought into any map via Create-A-Class, at Loadout rarity. When upgraded via the Pack-a-Punch Machine, it becomes the Die Breaker gaining increased ammo capacity, maximum reserve ammo and damage. 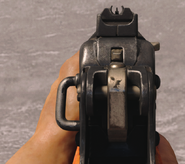 The default Iron Sights of the OTs 9. 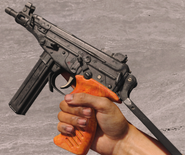