In single-player campaign mode, it is possible to pick these up from dead Japanese soldiers in the Marine Raiders campaign. These grenades are not available in multiplayer, split-screen (unless on Co-op) or online, but they can be used in online custom matches if the player selects to play as the Japanese, as online custom matches only allow usage of weapons by country. In-game it functions like any other Frag grenade. 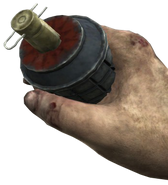