Klaus is a robot created by Elizabeth Grey that is capable of long-ranged and hand-to-hand combat. According to its blueprint, Klaus appears to have some sort of consciousness, but lacks an understanding of human fragility. According to Grey, however, Klaus is not yet ready for actual combat scenarios.

Grigori Weaver intercepts her message asking for her robot's whereabouts, explaining that the Director of Requiem, himself, pulled him out of Research and Development to be deployed in Berlin where he is collected by a CIA Safe House. The Director has secretly reprogrammed Klaus to eliminate the agents from the Safe House, Bedard, James and Jack, who intercepted a classified communique regarding "Project Janus".

Klaus can be found within the CIA Safe House, deactivated and chained to a chair due to murdering a total of three different agents since his arrival to Berlin. He is missing his hands alongside a battery.

His hands can be found in Hotel Room 305, behind a boarded up door, strangling a corpse in a rather compromising position. To open the door, a zombie must be inflicted with Brain Rot near to the door, to which they will break it open and allow access to Klaus's Hands alongside the locked safe containing the free Conversion-Ready Binary Repeater-Standard.

The Battery was thrown by Agent Rico into the No Mans Land between the divided city, however it was picked up by a Krasny Soldat and will be dropped by the first one killed.

With the parts replaced, Klaus will break free of his chains and be ready for use. During this time, the Strike Team member whom activated Klaus will have their Tactical slot stowed for the Klaus Remote Control, this allows Klaus to be moved into position and interact with specific items.

Klaus can be upgraded a total of three times, with each also upgrading his personal XM4. A unique version of the Arsenal can be located within the abandoned Garment Factory, however it is missing a Microwave Dish. Said Microphone Dish is located within the "Death Strip" in one of the searchable Debris Piles. Once attached, Klaus needs to kill approximately 45 [citation needed] zombies before he can be commanded to interact with the Upgrade Station, this is indicated by the Upgrade Stations monitor of Klaus turning green. If done prior to this, he will retort that the Strike Team are getting ahead of themselves.

When Klaus enters the Upgrade Station, a Defence objective of 1 minute starts up and an infinite number of standard zombies alongside Disciples will spawn. During this time, the zombies will prioritise the Upgrade Station and if failed, the step must be restarted. When completed, Klaus will have his XM4 Pack-a-Punched alongside being able to access the final tiers of his upgrades.

The six Electrical Boxes are in:

Commanding Klaus near the Electrical box will have him punch is open, if he has been upgraded. If not, he will complain about it hurting his hand. With the Floppy Disks, Klaus can be commanded back into the Upgrade Station and the floppy disk used to upgrade him. First will upgrade him into an Emo style outfit alongside upgrading his XM4 another stage and putting the Upgrade Station into cooldown.

The final upgrade will upgrade his XM4 to the max Pack-a-Punch level and giving Klaus a Punk rock makeover.

A model of Klaus. 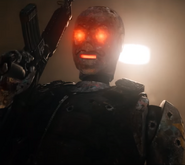 Klaus volunteers to send himself into the Dark Aether.

Klaus after his second upgrade.

Klaus after his third upgrade.