Knee Deep is one of the maps available in the first Call of Duty: World at War map pack. It is set in a village in Peleliu with the opposing sides being the Imperial Japanese Army and the Marine Raiders.[1] Knee Deep takes place on the island of Peleliu in a once tranquil village turned chaotic Japanese command center. Aiming to retrieve the valuable intel housed in the command post, troops fight through the jungle, wade knee deep in streams and take battle positions in fortified Japanese bunkers to secure this important communication center. Ideal for all combat scenarios and designed for larger team games and objective matches.

An early version of Knee Deep. 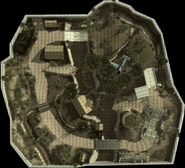