The knife will always kill enemy players in a single stab/slash, regardless of whether they are using the Juggernaut perk (Call of Duty 4) or the Painkiller Deathstreak (Modern Warfare 2). In Old School multiplayer matches, however, two knife attacks are required to kill an enemy player at full health. The knife is only effective at point-blank range, although the Commando perk will significantly increase its effective range by introducing a rather long-range lunge. Using the knife is considered a stealthy attack, and will not reveal the player's position on the minimap, allowing the player to perform stealthy kills without need of a suppressor. While inherently quiet, the knife will however make a rather thick slash or stab sound that is audible in close range.

In Call of Duty 4: Modern Warfare multiplayer, the knife has a number of challenges that will reward a player XP for using the knife in certain ways. These challenges include Knife Veteran, Slasher and Backstab.

When using the knife, the player will either lunge at the target if the target is far away enough, or if the target is close a slash will be used instead. The slash attack has a wider range and hence a higher chance of landing at point-blank range; although the lunge naturally has a longer-range due to the thrusting movement of the player. Experienced players will use the knife when out of ammo and indoors, but will switch out an empty weapon for a new one at the first chance. The usefulness of the knife in Hardcore modes is somewhat lessened due to most weapons being able to kill in one to two hits at close range. It is however still useful as a silent, close-range and ammo-less attack.

The Tactical Knife is a weapon attachment in Call of Duty: Modern Warfare 2 that approximately halves the cooldown of the melee attack; effectively allowing the player to perform stabs at twice the speed. Handguns are the only weapons compatible with the tactical knife, which is unlocked after obtaining 75 kills with the USP .45 or M9 or 100 kills with the Desert Eagle or .44 Magnum. The .44 Magnum is one of the more commonly used Handguns for this purpose as the gun is unlocked early and has decent range and damage to compensate for the Tactical Knife's shortfalls. Also, if the health is set to double, you will have to stab twice.

The wide slash of the standard combat knife is not present when using a tactical knife, but the window in which the opponent may be lunged seems widened. The lunge is also far faster with the tactical knife. Players often have classes dedicated to knifing, either for tactical diversity, sowing chaos, or most commonly, sheer amusement. These players often equip a maximum-mobility primary weapon (Sniper Rifle or SMG), Marathon (Perk 1) and Lightweight (Perk 2) to maximize their running speed and time spent running. The range bonus provided by Commando sees it used as the Perk 3 in the majority knifing classes, while the stealth granted by Ninja is also a viable option.

Some players, upon earning a care package, will take out the care package marker but will not throw it, because their mobility (foot speed) is improved and hence are able to reach melee distance quicker, however this has been patched.

When in third person mode, use of the knife attack in prone gives the appearance of swinging the equipped weapon at the enemy. Upon closer inspection the knife appears to stick out of the weapon, like a badly mounted bayonet. This glitch was also present in COD4, although it has no effect on gameplay.

It is possible to dodge a knife lunge, leaving the knifer defenseless for a short while, though this is only generally possibly while using Lightweight and a light weapon such as a SMG. 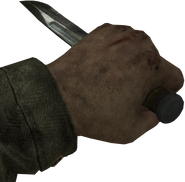