"No, it's Manticore. We've got to pull back, get everyone out!"
— Knox's last words in "Throttle".

Lieutenant Knox is a character appearing in Call of Duty: Advanced Warfare. Second-in-command of the Sentinel Task Force, he worked with his commander Cormack to stop any threats from the KVA attacks on Seattle and across the globe from happening ever again, until the Atlas Corporation became too powerful and the dominant military force in America.

He appeared in many missions to stop Atlas and the upcoming war plagued by Jonathan Irons vengeance theory. He fought bravely until his death in New Baghdad during Sentinel's final assault on Atlas.

Knox's first appearance is in the level "Aftermath", near the end of the mission where he and two Sentinel operatives save Mitchell and stop the KVA from getting Dr. Pierre Danois from them. Gideon asks for clearance of his affiliation but is denied. Knox and the two operatives give Mitchell, Gideon, and Joker covering fire to escape.

Knox appeared in "Sentinel" with Cormack, and two new members who defected from Atlas; Mitchell, and Ilona. Going into Irons' personal estate in Bangkok, he provided Mitchell over watch of the estate into the database and a path to regroup with Cormack. The team discover that Manticore is a chemical weapon and has effects, which succeed with Cormack and Mitchell setting a tracker on a carrier carrying Manticore.

In Bio Lab, he appears on the ground with Cormack, Mitchell, and Gideon who joined the force after the mission in Antarctica. The team recover vital information but cause a security breach and alert both scientist and soldiers alike; they fight their way to convoy. The allies rally into a T-740 Hovertank and make their way to the rendezvous point; destroying Atlas' Bio Lab for good.

In due time, Irons appears to the U.N. Security Council and is inaugurated and gives as speech. In his speech, he declares war on the governments of the world. Attacking San Francisco's U.S. Fleets. Knox is heard only in "Collapse" as Mitchell and Gideon are on the ground. Atlas plans to attack and succeeds as the Golden Gate Bridge is destroyed in the process, resulting in the deaths of thousands of civilians, police and Sentinel personnel.

With a large U.S. Navy carrier under siege from Atlas, Knox joins Cormack with Mitchell and Gideon in the field and regains control of the carrier, destroying all the incoming Atlas forces in the process.Succeeding, Knox asks Cormack what is next. Cormack tells him, Mitchell, and Gideon that Irons has murdered innocents and says he will be put down.

Final Assault on Atlas and DeathEdit

His last appearance is in "Throttle", attacking Atlas HQ in New Baghdad, Iraq. The battle falls as Manticore is unleashed on Sentinel personal; along with Knox. After being infected, he rejects Gideon's offer of help and yells that to evacuate everyone out of the area. Afterward, his body is presumed to be taken into the camps where Cormack, Mitchell, Gideon, and Ilona are taken. The bodies infected were studied, and he is possibly in one of the body bags. 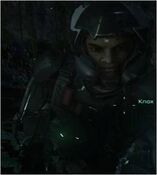 Knox before being infected by Manticore

Knox, moments before his death
Add a photo to this gallery

Retrieved from "https://callofduty.fandom.com/wiki/Knox?oldid=2493929"
Community content is available under CC-BY-SA unless otherwise noted.