The Korean People's Army (KPA; Chosŏn'gŭl: 조선인민군; Chosŏn inmin'gun) constitutes the communist military forces of North Korea. They are an army featured in Call of Duty: Advanced Warfare, and the first antagonist force encountered by the player. Their only appearance in Campaign Mode is in the first mission "Induction", where U.S. Marines battle the forces of North Korea for control of the South Korean capital of Seoul.

The model of a KPA soldier. 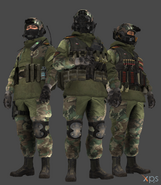 Add a photo to this gallery
Retrieved from "https://callofduty.fandom.com/wiki/Korean_People%27s_Army?oldid=2507798"
Community content is available under CC-BY-SA unless otherwise noted.