Senior Lieutenant Kozlov (Russian: Козлов) was a Soviet officer and political commissar who fought during World War II as featured in Call of Duty. He appears only once during the level "Red Square".

Kozlov was the commander of the barrier company charged with summarily executing all soldiers who deserted the battlefield. On 18 September 1942, the Soviets were making a push to recapture Red Square from its German defenders. The first wave failed, forced to retreat after meeting stiff resistance from the German line. Kozlov ordered the deaths of the deserters from the first wave, and initiated the second wave. The second wave after a flanking action carried out by Sergeant Makarov and Alexei Voronin was successful, ending the assault.

Kozlov will fire on the player if he retreats past the barricade ahead of their position.

"For Mother Russia comrades! Do not turn your back on her!"
— Senior Lieutenant Kozlov 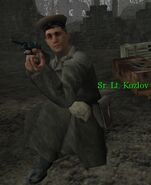 Kozlov with his Luger.
Add a photo to this gallery

Retrieved from "https://callofduty.fandom.com/wiki/Kozlov?oldid=2431464"
Community content is available under CC-BY-SA unless otherwise noted.