Kremlin is a multiplayer map featured in Call of Duty: Advanced Warfare that was released in the Supremacy downloadable content pack. This map is located in Moscow, Russia.

Kremlin is a large map consisting of multiple entry ways to the buildings and containers as jumping spots, making it suitable for objective based game modes. Due to the long lines of sights, long range weaponry such as assault rifles or heavy weapons should be equipped but sniper rifles can also work very well. Exo Grapple is very good, the walling of the buildings and interiors serve as grappling points.

The two buildings consist minguns attached to the windows on the second floor. The miniguns are very powerful, however, it leaves players handling them exposed to long range weapons and aerial based scorestreaks. The bridge may be considered dangerous due to the minigun positions. There is a small coverage on both sides of the bridge giving players a hiding spot. An underground section below the bridge makes it safer to navigate through it. Once the dynamic event occurs, jumping on the containers avoids players getting damaged by the blast. Players equipped with Blind Eye allows them to run directly on them.

On the right side, a platform can be used as a sniper postion but staying long isn't advisable. As stated above, the wallings make it good grapple points that makes the gameplay faster. The back entry ways of the buildings can be utilized as safe areas so players can regenerate health but doesn't mean enemy players aren't allowed to venture on. Some interiors allow players to ambush enemies from behind or as alternative routes.

One of the Miniguns in the map.

Another Minigun in the map.

T-600 Titans, seen in the background of the map. 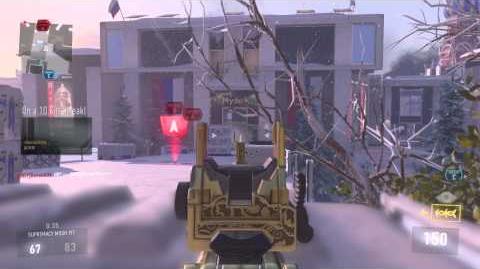