The most significant appearance of the Kriegsmarine is in the level "Battleship Tirpitz" when Captain Price, Sgt. Waters and Sgt. Evans infiltrate and sabotage the Tirpitz. On October 15, 1944, the Tirpitz made for the neardy Tromsø, Norway for repairs after it was damaged by RAF Bombers. As of October 27, the Tirpitz was undergoing maintenance near Håkøya, Norway. With its status, the majority of the Tirpitz's crew was on leave in nearby Tromsø, leaving only a small skeleton crew aboard. The British SAS took advantage of this opportunity, and assigned 3 Troop, 2 SAS to further disable the Tirpitz by destroying its boilers (thus leaving it idle in the harbor), its radar system (leaving it vulnerable to air attack), and acquiring its logbook. The operatives used the cover as officer replacements in from Tromsø to board the warship, and explosives in the ship's armory to carry out their objectives. The mission was a success, although Kriegsmarine sailors killed Price in the belly of the ship.

Half a month later on November 12, the Tirpitz was destroyed by RAF bombers near Tromsø, in part thanks to the SAS operation.

The Kriegsmarine only appears in mission Sicily 2, where its PT boats attack Doyle and Ingram while they try to escape.

In the level "Liberators", en route to targets in Oran, Algeria, "Stretch" Rogers' B-24 Liberator encounters a convoy of German destroyers. Upon taking heavy anti-aircraft fire from the convoy, Rogers destroys the warships via the bombardier post of his B-24.

A Kriegsmarine Matrosen and Korvettenkapitän guarding the armory of the Tirpitz.

A Kriegsmarine Korvettenkapitän stationed on the Tirpitz.

A Kriegsmarine Matrosen guarding the Tirpitz, armed with an StG-44.

A Kriegsmarine Matrosen on the Tirpitz.

Price assaulting the Tirpitz, killing the guarding Matrosen and Korvettenkapitän. 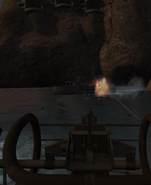