Intact within the Dark Aether

In the Call of Duty: Zombies comic, Victis (the TranZit crew) searches for it with the help of Primis Edward Richtofen, who has asked them to conduct said research. As seen in a cipher, Monty revealed to Maxis the location of the Kronorium, who then sent Richtofen to retrieve it. It was located in the Empty Earth in Base Zero, which was constructed by some unknown Maxis version, and is protected to allow access only to those who have a soul.

In Revelations, it is found in The House in Samantha's room, where it is used to regain the Summoning Key and ultimately kill the Shadowman. It has been confirmed that the Kronorium holds the entire zombies timeline ranging from Dimension 63 all the way to Fractures.

In Blood of the Dead, it is revealed that due to the Cycle being broken, the pages of the Kronorium have changed - detailing the death of Edward Richtofen. As Primis fight their way out of the Alcatraz Pocket Dimension, a version of Richtofen who had already fought in The Great War manages to defeat the Warden of Alcatraz using the Elemental crystal of Fire. The Great War Richtofen then abandons Primis Richtofen to die, giving the Kronorium to Nikolai Belinski who still possessed his soul. After reading the Kronorium, Nikolai formulates his Grand Scheme to wipe the Apothicons, Element 115, and Doctor Monty from existence once and for all. The Kronorium leads Nikolai to recruit their older Ultimis counterparts and travel to Camp Edward, where they gather the Elemental Shard and defeat the Avogadro. Afterwards, Nikolai tasks Victis with gathering the Vril Vessel and Apothicon Blood to build the Agarthan Device, which he uses to plunge the Multiverse into the Dark Aether and create a new uncorrupted universe for Samantha Maxis and Eddie to travel to. The Kronorium's pages are erased alongside history during this, but the book itself remains intact within the Dark Aether.

There are seven ciphers that reveal excerpts throughout Gorod Krovi; currently only five of the seven have been decoded:

"In the beginning, there were only the Keepers. But then corruption of the dark Aether leached its way into the realm and twisted the minds of some of the Keepers. These Keepers turn into shadows of their former selves and eventually became Apothicons"
— Excerpt Unknown

"To allow quick travel between dimensions, the Keepers created a transference device which is powered by the Aether. The Keepers have placed structures throughout the realms."
— Excerpt B

"The life force from the Dead World allows the bearer to flow with all creation."
— Excerpt 27101978

"The Summoning Key is one of the oldest artifacts in all creation. It was used by the first one to mix all the dimensions with life, giving each one its unique balance. Under certain circumstances, it has the ability to form bridges between dimensions allowing the transfer of life forces back and forth. It resides in the 63rd dimensions of creation."
— Excerpt 349561223

"Once the great war ended with the defeat of the Apothicons, the Keepers ascended to become the wards of all universes. The surviving Apothicons were cast out, banished to the dark Aether beneath creation. After eons of exile in the dark Aether, the Apothicons evolved into twisted creatures that now bear little resemblance to their Keeper brethren. The Apothicons' ceaseless desire is to reenter creation to consume and corrupt all universes. It is the Keepers that guard against these perpetual attempts of reenter creation, and guard against any beings that may have fallen under the influence of the Apothicons."
— Excerpt 654371979 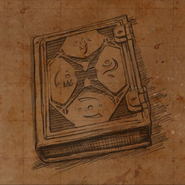 A drawing of the Kronorium as seen in the Zombies Chronicles timeline poster.

The entire Zombies timeline as seen on one of the pages of the Kronorium.

The Kronorium sitting by Der Eisendrache's MPD when Primis travel back in time.

Richtofen reading the Kronorium in the intro cinematic of Blood of the Dead.

A page of the Kronorium detailing Richtofen's death during Blood of the Dead. After this, the pages fade away as history itself is erased.