Any weapon obtained by the player in multiplayer.

"Step up if you want to get burnt."
— Firebreak's default quote in the Winner's Circle.

"Prague-born Krystof Hejek is a battlefield problem solver; armed with a powerful arsenal of weaponry, he effectively resolves numerous issues over and over again using his favorite tool, fire. Whether it's direct one-on-one confrontation or the strategic denial of areas, there's no questioning Hejek's utility, even if the results of his work can be hard to stomach. Working up-close-and-personal with flame is something that very few volunteer to do, but Hejek thrives on it; he and fire appear to have come to an understanding. Usually calm and dispassionate, the only time he truly lights up is when his enemies do."
— Firebreak's biography

Firebreak had a troubled childhood due to his rough upbringing and his alcoholic father. After his sister was injured by their abusive father, Firebreak released his pent-up rage by setting fire to a warehouse. His father left him in the police station for that night, further enraging Firebreak. Later, Firebreak decided to put an end to the abuse and attempted to burn his father alive. His father survived and his sister was badly burnt, and he was sent to a correctional facility. At the age of 17, he was recruited into the military as a pyro unit.

Firebreak seems to care little about his allies. He sees battle less as dangerous and more as a physical activity or as fun. He is completely psychopathic and as a result is on a large amount of medication which seems to have little affect. While Firebreak seems to receive a certain amount of respect from his comrades he rarely returns this sentiment.

Firebreaks backstory is retconned slightly in Call of Duty: Black Ops 4. Instead of his father surviving the fire and his sister being badly burnt, his father dies and Firebreak's sister escapes unharmed. Firebreak's backstory is explained further in his backstory comic. Feeling guilty that he robbed his sister of her childhood by killing their father, Firebreak begins to suffer from auditory hallucinations. He seeks out his sister Marika in an effort to reconnect and finds her working as a seemstress. His sister is discovered to be badly burnt and the instigator to their fathers murder, revealing her to be an pyromaniac. She lights a piece of fabric on fire causing the textile factory to become engulfed in flames. A section of the roof falls on Firebreak trapping him while Marika escapes while she warns him to stay away. This leaves Firebreak in a state of anger as the fire engulfs him.

Firebreak: "Hm, my family? What's to tell; my mother left because my father was a drunk, no surprise, I acted out every chance I could. Small things first, little fire here, something broken there, no harm, no foul. One time, he hurt sister pretty bad, didn't mean to, but, grown man was stronger than he think, after that, I set fire to warehouse on other side of train tracks from house. Hehe, first time I get in trouble with police, father let me stay in holding cell for 3 days, probably not want anyone seeing sister's broken arm. I was 10 years old."

Firebreak: "Ha, a few months later after my father had passed out from night in customary stupor, my sister suggested we rid ourselves of the old man for good. Hmhm, seemed like good idea. I took his lighter from table and set fire to chair he was snoring in. This was when plan go bad, he woke up screamed and ran from room knocking over spirits on table, spread fire all over the place. Fire is fickle thing, you think you understand it, then it begs to differ. Father ran from house, sister got badly burnt, I ended up in juvenile care facility, and that's where I stayed 'til 17. When I get choice. Adult correctional facility? Or military service? I picked military service, where now, they want me to burn people. Hehe, life is strange, no?"

Firebreak: "The job I do is not for everyone. It's close up work, you get to see what you do. You can't deny it. You can't unsee or unsmell it. Used to be I'd RTB, and the smell of burning flesh would be so strong, I wouldn't be able to eat. Doesn't bother me anymore. And as you can see, I normally get table to myself. I like to think I'm a problem solver. Enemy has you pinned down? Give me a minute, no problem. Choke point need choking? Flame, no problem. Hostile sniper using a building as nest? Give me five minutes. No building, no problem. You see the trend? Fire really is that versatile."

Firebreak: "Understand that it has its moods, its tempers, won't always do what you want or expect it to, but, when it comes down to it, when you harness it properly, you're going to be one of the most effective units on the field, your kills are rarely clean, and they often make a lot of noise, psychological impact of that, hm, is priceless, you'll be feared by your enemies and respected by your allies, actually, your allies will probably fear you too, and you know, I'm fine with that."

"Firebreak reporting in."
— When selected in the Specialists Menu.

"Finally, some action."
— When selected in the Specialists Menu.

"You need a disposal crew?"
— When selected in the Specialists Menu.

"Immolation assured."
— When selected in the Specialists Menu.

"Off the leash at last."
— Starting line.

"Ha! Now you're talking my language."
— In response to Battery's "Bringing the Smoke" line

"Was that a threat? Sounded like threat."
— In response to Spectre's "Stay Out of My Way" line.

"fired up and ready to burn."
— starting line.

"Shit, BACK AWAY!"
— When stuck by a Semtex Grenade.

"I'm stuck, BACK OFF!"
— When stuck by a Semtex Grenade

"SEMTEX ON ME!"
— When stuck by a Semtex Grenade

"SEMTEX I'M HIT!"
— When stuck by a Semtex Grenade

"I’ll burn everything you care about to the ground."
— Firebreak's "Burn" taunt.

"Step up if you want to get burnt."
— Firebreak's default "Step up" taunt.

"You were on fire, and I'm being literal here."
— Firebreak's "On Fire" taunt.

"You weren't worth the cost of the gas I used."
— Firebreak's "Unworthy" taunt.

"WHEN YOU'RE THIS HOT, THERE IS NO WAY TO LOSE."
— Firebreak's "Extinguisher" taunt.

Promotional Artwork of Firebreak in Call of Duty: Black Ops 4 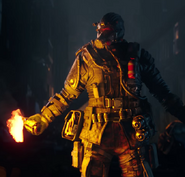 Firebreak holding a Molotov in a Specialist HQ cinematic.

Firebreak in the CODM Comics.

During Operation Dark Divide, Firebreak was given the supervillain alias "Magmageddon", and was aligned with the villains in their struggle against the superheroes.