The Kuda is the SMG the Player starts out with in the level Black Ops, providing the Player with a well-balanced weapon to start off with. It also comes with a pre-unlocked optic and a few attachments which makes it more versatile.

Some enemies are able to carry one and can be obtained if the Player has the Copycat Tactical Rig equipped.

The Kuda is the first submachine gun the player starts out with, which provides the player with a well-balanced weapon. It has a low three hit kill range of only three meters, but has a four hit kill range of twenty-five meters, which is very good for a SMG. With its fast rate of fire comes average damage, good accuracy and mostly low recoil for its class, making it great to use in short and medium range combat, but not stable enough to reliably use at long range.

The Kuda shares the same attachments as other SMGs. Quickdraw, Stock, Laser Sight and Long Barrel all help boost the Kuda's reliable statistics, allowing the user to quickly ADS in a gunfight, strafe in and out of gunfire, increase hipfire accuracy and requiring less shots to kill at medium range.

Grip, Suppressor, FMJ and Rapid Fire don't contribute as much to the Kuda as other attachments do. FMJ increases the KUDA's damage properties against cover and scorestreaks, and Rapid Fire increases the KUDA's fire rate by 6%, from 722 RPM to 765.32 RPM. The Kuda's already low recoil means that the Grip may not be necessary for players and the Suppressor harms the Kuda's main advantage, its stronger damage at medium ranges. Many players will not attempt to hit people through cover with a Submachine Gun and notice a difference in the fire rate, resulting with the four attachments showing up less frequently in multiplayer games.

The Kuda also shares the same diversity in sights as the other SMGs. The Reflex and ELO sights replace the base iron sights with easy to use Optics. The Recon has a higher magnification than the Reflex and ELO, trading short range use for medium range use. While the Kuda does excel at medium ranges, equipping a Recon Sight will harm short range use, something users may not want to compromise on. The Varix 3 allows the user to toggle between two magnifications: 1x and 3x. The Varix 3 also helps lower the recoil of the Kuda, resulting with an efficient yet awkward choice of sight. The BOA 3 acts like a hybrid of the Varix 3, Reflex, and ELO sights. Not only is the BOA 3 open, but it also helps reduce the Kuda's recoil.

The Kuda is a wall weapon that costs 1250 points which appears in Shadows of Evil, The Giant, Der Eisendrache, Zetsubou No Shima, Gorod Krovi, Revelations, and the remastered Zombies Chronicles maps Nacht der Untoten, Verrückt, Shi No Numa, Kino der Toten, Ascension, Shangri-La, Moon, and Origins. It can also be found in the Mystery Box in Zetsubou No Shima.

The Kuda can be compared to the MP5K and MP5 from the previous installments, with the same handling, a similar appearance and almost identical iron sights. It is effective in the rounds below 15 if not Pack-a-Punched and is a reliable as well as a cost-effective weapon for the lower rounds. However, its damage, small magazine, and its reserve ammo amount can be a letdown in later rounds when compared to other weapons the player can get.

When Pack-a-Punched, it becomes the Crocuta, gaining an Extended Mag as well as increased damage and reserve ammo.

The Kuda in first person view 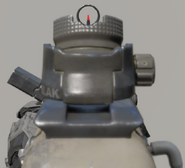 The Kill Counter on the Kuda