The L-CAR 9 (known as the Spyder in the alpha build) is a fully-automatic pistol featured in Call of Duty: Black Ops III.

The L-CAR 9 is a super-compact machine pistol designed as a lightweight personal defense weapon. While never intended to be used extensively in combat, the L-CAR 9 offers acceptable performance and stopping power at close range, making it a favorite backup weapon for military and police forces requiring more firepower than a conventional semi-automatic pistol.

The L-CAR 9's size, portability, and ease of concealment have made it popular with gunfighters all across the spectrum; from military vehicle crews to private security groups to special forces units.

Although the L-CAR 9 only supports a limited range of attachments and modifications, it has become infamous for it's extremely low audible signature when using an attached silencer.

The L-CAR 9 appears in Shadows of Evil for 750 points on the market table outside the spawn room, in the Junction. It can be found in The Giant on the wall where the M1A1 Carbine had been in Der Riese. It can be found in Der Eisendrache in the room above Double Tap, and in the small corridor directly in front of Quick Revive. In Revelations, it can be found near the spawn.

For a starting weapon, the L-CAR 9 does sport good damage, rivaling that of the ICR-1 and even surpassing that of the KN-44. Its starting ammo is also good, tied with the max ammo of the Ray Gun. However, its high rate of fire may be a problem, as due to this, its ammo will run out very quickly, thus forcing the player to either get more ammo or get a better wall weapon.

The L-CAR 9 in first person 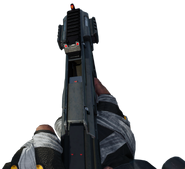 Chambering a round into the L-CAR 9