High (without grip), Moderate (with grip)

sa80, sa80lmg_scope (Scoped variant)
The L86 LSW makes its first appearance as a Light Machine Gun in Call of Duty: Modern Warfare 2. It appears in both the campaign and multiplayer modes with a 100-round drum magazine, iron sights and the carrying handle. Uniquely, when the ACOG Scope attachment is equipped, it takes the appearance of the British 'SUSAT' Scope.

In the campaign, the L86 LSW makes its only appearances in the campaign mission "Loose Ends", and the Special Ops mission Estate Takedown. Three of them (complete with SUSAT sights) can be found in the room next to the kitchen on the first floor of the house. Another L86, with Iron Sights only, can be found in the basement of the weapon and ammo cache armory. It is extremely useful as it has LMG firepower and magazine size without the long reload time associated with an LMG. Unlike its multiplayer counterpart, the campaign version L86 LSW has near-zero recoil.

The L86 is one of two pre-unlocked light machine guns, and the primary weapon for the default Overwatch class, which includes a Red Dot Sight and a Grip. The L86 LSW has one of the highest damages per second of any weapon in the game. At close range, its damage per second is beaten only by the shotguns, the G18 and MP5K, and is equal to the TAR-21 and the PP2000. The L86 LSW has the highest damage per second at long range out of all the automatic weapons, and is able to kill in two shots with Stopping Power or three shots without it. But the L86 also has the highest recoil of all the LMGs by far, making it difficult to use at longer ranges unless firing in short bursts. The L86 has the second fastest reload time of the LMGs, after the AUG HBAR, and benefits greatly from Reload Canceling.

L86 has heavy recoil when firing in full-auto, and its iron sights are generally disliked, as they block the target at long range and will suffer heavily from muzzle flash. As a result, it is most commonly used in conjunction with the Bling perk, with a Grip and sight attachment. Like other LMGs, it also suffers from a slow ADS draw time, although this can easily be mitigated with the Sleight of Hand Pro perk. Firing single or double shots can make the L86 much more accurate at longer ranges and make it easily capable of racking up kills on maps with tight alleyways where suppressing fire is often needed. If the player chooses to add a sight to the gun, the SUSAT scope is a good candidate, as although it does increase recoil slightly, its sight is much clearer than the iron sights, making it more effective at long range, while raising ADS to the point where muzzle flash is not even seen, let alone a problem. The alternative choice is the Holographic Sight, which offers the most precision at the expense of some muzzle flash.

Due to the extremely high damage per second of the L86 it can be surprisingly effective in CQB, certainly the most effective of all the LMGs. Compared to most CQB weapons it sacrifices fast handling for tons of ammo, allowing the gun to excel in engaging large numbers of enemies. Sleight of Hand Pro helps hugely in such situations, as the slow ADS time when compared to assault rifles and SMGs can otherwise be crippling. Additionally, with Sleight of Hand the reload time of the L86 with reload canceling is as low as many assault rifles. Due to the rarity of needing to reload, having a secondary as a backup is less necessary than on most guns, freeing up this space for launchers or One Man Army. Finally, the very high bullet penetration the L86 shares with all LMGs can give it an edge shooting through walls over most weapons particularly on maps like Favela or Scrapyard.

The Silencer reduces damage, but still makes the L86 LSW arguably the best stealth LMG since the other four LMGs either have a faster fire rate but lower damage (M240), or the same damage and a slower rate of fire (the RPD and AUG HBAR) compared to the L86. However, one should keep in mind the M240 and MG4 have glitched silencers; the red dot still shows on enemy radar. As stated it suffers from having higher recoil than any other LMG, meaning at longer ranges burst-firing or semi-auto firing is required to kill where the others would be able to fire full-auto.

When fitted with the Heartbeat Sensor, while in ADS, the player can still view all but the very bottom edge of the Sensor screen. In conjunction with a grip, it can make a very good mid-range support weapon. 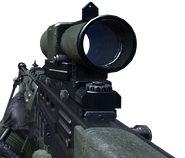 The L86 with SUSAT scope. 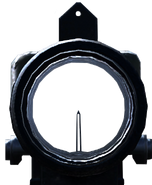 Aiming down the SUSAT scope.

The L86 LSW in third person.
Add a photo to this gallery

Behind the Scenes[edit | edit source]

The L86 was supposed to be an L85 rifle at one point in Call of Duty: Modern Warfare 2, as the L86's texture sheet has the L85's 30-round magazine on it. The campaign pick-up icon also has the L85's 30-round magazine. The L86's kill icon in multiplayer is still an L85, giving further evidence that the L86 was once an L85. Also, the maximum ammunition amount in the campaign is 420, which is divisible by 30, the usual Assault Rifle magazine size, further suggesting it was the L85 earlier in development. 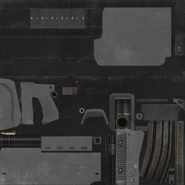 L85 HUD icon seen in multiplayer.
Add a photo to this gallery

"Possessing the highest rate of fire in its class, the L86 LSW suppresses enemy targets with a relentless stream of bullets. Its heavy frame noticeably slows mobility, and high recoil combined with low accuracy makes pinpoint targeting difficult. Find a defensible position, get low, and tear down incoming targets from afar."
— Call of Duty: Elite description

The L86 LSW is unlocked at Level 4 in Call of Duty: Modern Warfare 3's multiplayer.

The L86 LSW has the second best rate of fire in its class, at 800 RPM. This fire rate makes it have one of the better time to kill ratios among LMGs.

The L86 LSW is a mixed bag in terms of accuracy. The iron sights are quite clean, but the L86 LSW has enormous gunkick that makes it virtually impossible for the user to track their aim properly. The recoil per shot is very low, with light kick to the sides and upwards. Making the recoil profile even nicer is the L86 LSW's large centerspeed value of 1700. The recoil profile is easily the smallest out of all the LMGs, to the point where a Grip is more of a luxury than the must-have status it is on other LMGs.

The L86 LSW's handling characteristics are impressive for an LMG, but sluggish in the grand scheme. The L86 LSW user moves at a terrible 80% of the base speed, or 32% of the base speed when strafing. The hip-fire crosshairs are large. The aim down sight time is slightly faster than most other LMGs, at 380 milliseconds. The L86 LSW also has easily the fastest reloads in its class, with the reload animation taking 3.76 seconds to perform, but a Reload Cancel can be performed after 3 seconds. This is easily the fastest reload speed in the L86 LSW's class, with the next closest, the MG36, being a full second slower, and the rest of the LMGs needing double that amount of time to perform a reload cancel. Reloads are relatively painless for the L86 LSW, although one must remember that is a slow reload overall, so the user shouldn't be overly cavalier when using the L86 LSW.

The L86 LSW has the standard LMG capacity of 100 rounds per drum. The L86 LSW user spawns in with two drums by default, for a starting ammo loadout of 200 rounds.

The L86 LSW has the standard assortment of attachments on offer. The Red Dot Sight and Holographic Sight provide an alternative to the iron sights. Sadly, the obnoxious gunkick still remains. The iron sights are clean enough, making these two attachments pointless.

The Silencer removes muzzle flash, makes the L86 LSW much quieter when firing, and makes it so that the user's position isn't revealed by a red dot when firing on the mini-map. The Silencer has no downside, seeing how the L86 LSW lacks damage drop-off, making the Silencer one of the best attachments on offer.

The Grip reduces the L86 LSW's recoil values by ten percent, and increases the L86 LSW's centerspeed to a huge 2125. This makes the L86 LSW have virtually no recoil. It is definitely an overkill attachment, seeing how the L86 LSW already has one of the best recoil profiles in the game. The Grip also makes the reload animation extend to five seconds long, although the reload cancel time is unaffected. Even when considering this, the Grip isn't a bad attachment choice, especially if the user wants a weapon with practically no recoil. Possibly the key defining feature of the L86 LSW is that it is not reliant on the Grip to be accurate, unlike a slew of other LMGs in its class.

Rapid Fire increases the L86 LSW's rate of fire to 1000 RPM. This attachment makes the L86 LSW even more deadly, and with little penalty. As the L86 LSW is already very accurate, the extra recoil Rapid Fire brings is minimal.

The ACOG Scope provides a long range sight for the user, having a higher innate zoom level than the Iron Sights, the Red Dot Sight, and the Holographic Sight. The L86 LSW excels at a distance due to its high damage at range and great accuracy, so this attachment definitely suits the L86 LSW.

Its minimum damage was increased via hotfix, and now it only needs three bullets to kill at all ranges, even when using a silencer.

The L86 LSW is available for both Survival and Mission modes.

The L86 LSW is used by the EOD tech in the Mission Mode challenge Invisible Threat. A pair of L86 LSWs is also in the underground armory in Server Crash and at the infil point in Smack Town.

The L86 LSW is available in Survival Mode at level 41 and costs $7000. Compared to other LMGs, it is rather versatile due to its fast reload speed and high fire rate, but due to its low damage, is beaten in almost every aspect by the MG36. Adding the Grip is highly recommended for the L86 as its recoil is rather high. When using the grip, its recoil tends to walk upward, but this can be remedied by pushing slightly down with your mouse/R-stick.

A Call of Duty: Modern Warfare 2 L86 LSW with red dot sight seen in a trailer.

SUSAT scope of the Modern Warfare 2 L86 LSW in "Stronghold".

Aiming down the SUSAT scope; note the carrying handle, which is not present on the Modern Warfare 3 model.
Add a photo to this gallery 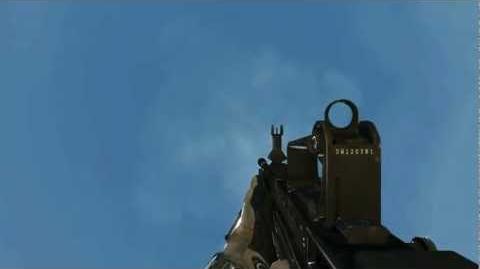 Fully-automatic
The L86 LSW reappears in Call of Duty Online as the SA80-LSW.

The SA-80 LSW in first person

The L86 returns in Call of Duty: Mobile as the UL736. It has different model and has a drum mag by default.

It has the lowest magazine size of all LMG's in the game, however it features better damage, good fire rate and better ADS speed than its peers. Due to the low mag size, the reload speed and sprint speed on this gun is also relatively faster. It has low recoil, however the horizontal recoil might kick in unexpectedly.

The UL736 has low mag size for a LMG, however its damage output is higher than its peers. It can be found as Uncommon and Rare blueprints.

The L86 LSW appears in Call of Duty: Modern Warfare as the SA87 (referred to as L86A2 in early stages).

Retrieved from "https://callofduty.fandom.com/wiki/L86_LSW?oldid=2548484"
Community content is available under CC-BY-SA unless otherwise noted.