Unlocked at Level 27, the L96A1 deals the highest effective damage per shot of all bullet weapons in Call of Duty: Black Ops. Its multipliers ensure a one-hit-kill to the shoulders, stomach, chest or head when unsuppressed. However, the L96A1 has a high amount of recoil, a slow center speed, a small magazine size and a low rate of fire due to its bolt-action nature. This leaves the player vulnerable between shots and makes consecutive shots difficult.

This weapon actually performs very well with no attachments equipped, as every attachment slot has minimal/adverse affects on the L96A1: The variable zoom levels will have to be modified before going into the appropriately ranged gunfight, Extended Mags' niche doesn't work well with this weapon, the Infrared Scope makes Ghost Pro users practically invisible, and the ACOG Scope magnifies sway, and disables the ability to steady it.

In Zombies, it is available out of the Mystery Box. It is a one-hit-kill in the early rounds, but after round 7 it loses its one-hit-kill ability to body shots. It is not available on the Wii version.

Due to its long ADS time, low rate of fire, high recoil, and low hipfire spread, the L96A1 is not a great primary weapon to use in Zombies. However, it is especially useful as a support weapon while other players are fighting off zombies. Double Tap Root Beer is a good perk to use if one wants to use the L96A1, as it makes the player cycle the bolt faster, allowing for an increased rate of fire. Deadshot Daiquiri is also useful to eliminate its high idle sway, tighten its hipfire spread, and maximize the efficiency of the L96A1 by making headshots a lot easier to obtain.

When upgraded in the Pack-a-Punch machine, it becomes the "L115 Isolator" where its damage is increased and receives a Variable Zoom scope. It loses its one-hit-kill ability from body shots at round 22. The magazine is increased from five to eight. Even though it is not very practical in terms of surviving, it can kill somewhat effectively, even at higher rounds, and can be quite common to be able to kill more than five zombies using just a single body shot past round 15. At this point, it would take a full 35-round magazine from a Lamenation to kill a single zombie, while the upgraded L96A1 would still be killing in one headshot until round 34, and would be a two-shot-kill to the head until round 41. All of this goes for the Dragunov, too, as it shares exactly the same damage as the L115 when upgraded. Due to the Dragunov sharing the same damage, and that the Dragunov has a semi-automatic rate of fire, the D115 Disassembler is, indefinitely, better then the L115 Isolator. However, when not Pack-a-Punched, the Dragunov suffers from significantly lower damage, effectively equalizing the two snipers at the start. 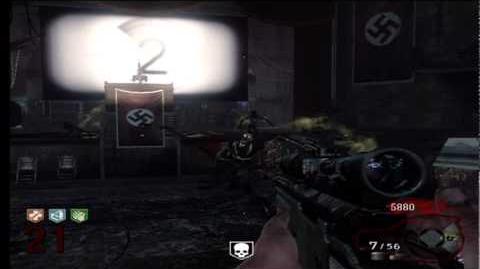 Retrieved from "https://callofduty.fandom.com/wiki/L96A1?oldid=2227978"
Community content is available under CC-BY-SA unless otherwise noted.