The LV8 Basilisk is an overall balanced weapon. Its damage is 30-22, which ranges from a four to five bullet kill. This is below average for an assault rifle. However, the damage is made up through the monstrous rate of fire, which is 1000 RPM, making this the assault rifle with the highest rate of fire, and the second best of all the guns within Black Ops III, being bested by the Vesper, and matched by the HLX 4. The key weakness of LV8 Basilisk is having a slight delay of 0.3 second before firing. This makes more cautious play advisable as the player is usually killed before being able to fire if the opponent has the advantage in a gunfight. This makes Stock a very good attachment, as the player can easily strafe from side to side as the gun is charging up. Despite this, the LV8 Basilisk is very powerful due to its low recoil, fast rate of fire and respectable range. To aid in Hardcore game modes, the ammo count is also displayed on the weapon.

The iron sights are very clear on this weapon, making optical attachments questionable. However, the recoil is low, but unpredictable, making BOA 3 a good choice for a sight if one wishes to reduce the recoil. Rapid fire is useless on this weapon, as this gun has a very high fire rate. Long Barrel is very good on this gun, as it increases the four and five shot kill ranges by a noticeable amount. Fast Mags is very useful on this gun, as it cuts the reload time by about 50%. Extended mags may be useful as the relatively small magazine can be emptied quickly by the fast rate of fire.

This gun paired with Flak Jacket/Afterburner, Scavenger and Fast Hands, and Tactical Mask along with Fast Mags, Quickdraw and Stock allows the player to constantly rush the opponent without the need to worry about running out of ammunition. Suppressor, Stock, and Quickdraw paired with Ghost, Fast Hands, Blast Suppressor and Tactical Mask allows the player to constantly use the flanks to pick off opponents, without the worry of having to attract the attention of other teammates.

The LV8 Basilisk in first person 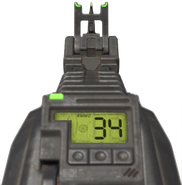 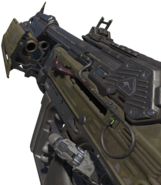 Picking the LV8 Basilisk up
Community content is available under CC-BY-SA unless otherwise noted.
Advertisement