M16, Krig 6, any weapon obtained by the player

M67 Grenade, Flashbang, any equipment obtained by the player

"A technological genius with special forces training, Sims joined MACV-SOG in 1967, serving on Russell Adler's team in Vietnam. He always provides a steady hand and sense of humor under pressure, no matter the circumstances."
— In-game biography

Lawrence Sims was born on February 4, 1942, at Fort Bragg in North Carolina. After the loss of his father, he developed a laid-back and lightly sarcastic persona, studying the world with detached amusement. Sims quickly immersed himself in the world of technology, both military and consumer, quietly focusing on following in his father's footsteps.

After receiving a scholarship and graduating from the Rochester Institute of Technology, Sims entered the United States Army, where he served for two years before joining the CIA. There, he quickly became known for his keen intelligence, pragmatism, and ability to solve intractable problems.

In a twist of fate, his first major assignment was a placement on Russell Adler's MACV-SOG team in Vietnam, where he immediately became one of Adler's favorite cohorts and trusted friend.

One morning in early January 1968, Lawrence Sims left Da Nang Air Base with USAF Airman Darren Kopp for a routine recon mission. After experiencing mechanical difficulties, their chopper touched down in a jungle clearing fifteen miles outside the base.

While waiting for assistance, they were ambushed by Viet Cong and forced to flee in the jungle. Kopp was killed in combat. Sims, ammo exhausted, took Kopp's knife and circled the clearing perimeter. He managed to take out three soldiers by hand before reinforcements arrived and secured the malfunctioning chopper.

Sims has continued to be a constant presence on Adler's teams ever since, including the fateful operation that would bring him face-to-face with Alex Mason and Frank Woods.

Sims during the Vietnam War.

Sims in the Multiplayer Reveal trailer. 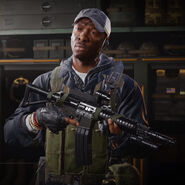 Sims as an operator in Multiplayer.