"12 years ago, Elias and the Ghosts, led by Rorke, are sent to eliminate General Diego Almagro."
— Mission Description

"Legends Never Die" is the sixth, and chronologically the first, campaign mission of Call of Duty: Ghosts. The mission involves the Ghosts, led by Gabriel T. Rorke, in hunting down and assassinating the Federation leader General Diego Almagro, in the capital of the Federation, in Caracas, Venezuela.

Two years prior to the ODIN strike on the United States, the President of the United States approved of a surprise attack on the Federation capital of Caracas, Venezuela. U.S. Soldiers and Marines distract Federation troops while Almagro attempts a scorched earth tactic by flooding his own city and escaping via helicopter. Captain Rorke leads a small strike team, now referred to as "Ghosts" by the U.S. Military, to try and assassinate General Diego Almagro and disband the Federation.

After taking out two missile launchers and hundreds of infantry, the Ghosts are forced to find another way when a massive flood drowns the city. Elias is saved by Rorke as the group continues their hunt. When they finally reach Almagro's chopper, Elias successfully kills the general before the helicopter is downed. Through consequential reasoning, Elias is forced to let go of Rorke, causing him to fall into the rushing waters below and prevent the deaths of himself and his fellow squadmates. Elias claims the decision to let Rorke go was the hardest decision he ever made.

Lieutenant Elias Walker now assumes command of the Ghosts and searches Caracas for Rorke's body. Unbeknownst to them, Federation troops captured Rorke and tortured him. Federation interrogators left him in a hole for days and fed him poisoned food that physically and mentally tormented his body. Eventually, Rorke then allied himself with the Federation, bent on hunting down the rest of the Ghosts.

The beginning of the mission.

Rorke falling after Elias lets go.
Add a photo to this gallery 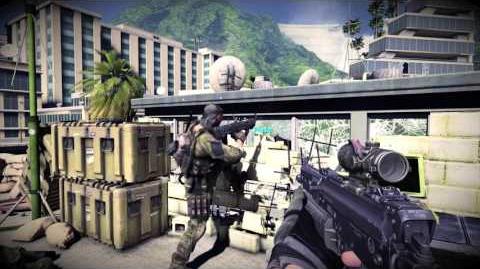